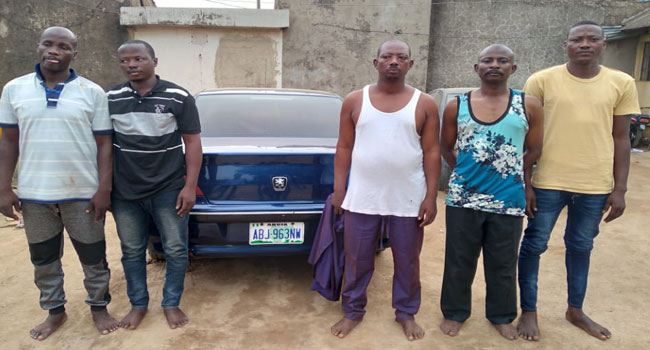 Police operatives attached to the Masaka Division have smashed a notorious syndicate of Motorcycle thieves that operate between AYA-Junction FCT Abuja and Keffi, Nasarawa State.

The suspects, Aminu Adamu, Adamu Mohammed, Rilwanu Bala, Kabiru Usman and Bashir A. Bashir were all apprehended on Sunday the 3rd of July, 2022.

Other exhibits recovered include, “One (1) spray teargas, one (1) pear of Handcuff, one(1) Walkie Talkie, Blank Motorcycle receipts booklet and criminal charms”.

Preliminary investigation revealed that, the suspects would often pose as police officers, hire commercial motorcycles riders whose motorcycles look new, they would take the unsuspecting victim to a location where one of the syndicate member would pose as an Assistant Superintendent of Police, and with that guise they would dispossess the rider of his Motorcycle and zoom off.

The suspects confessed to have snatched over thirty (30) motorcycles from commercial riders via the same technique, adding that they also produce fake receipts and sell the motorcycles off to unsuspecting members of the public.

Following the arrest, the Commissioner of Police, CP Adesina Soyemi, ordered that a discreet investigation be carried out, after which, the suspects will be charged to a court of competent jurisdiction for prosecution.