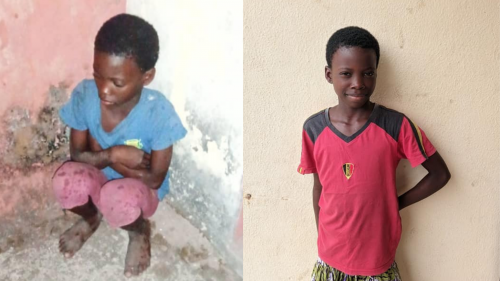 A 9-year-old girl, Esther Samuel was allegedly kicked out of the house by her boss, identified as Mrs Rose, for not selling enough sachet water in Calabar, Cross River State.

A non-governmental organisation, Basic Rights Counsel Initiative, found Esther, who is an orphan, on Friday night in the heavy rain and came to her rescue.

According to the BRCI, the girl said her boss threw her out of her house because she did not make many sales when she hawked sachet water in the streets.

A statement from the organisation says, “On the night of Friday of March 2021, a volunteer found a little girl in the rain and homeless. She was brought to the BRCI emergency shelter.

“Upon further investigation, it was discovered that she (Esther Samuel, 9 years old) was chased out of the house by one Mrs Rose whose address she cannot trace.

Who Owns The  Stolen Meat From The Cooking Pot? Delta State, James Ibori Or The Federal Government?