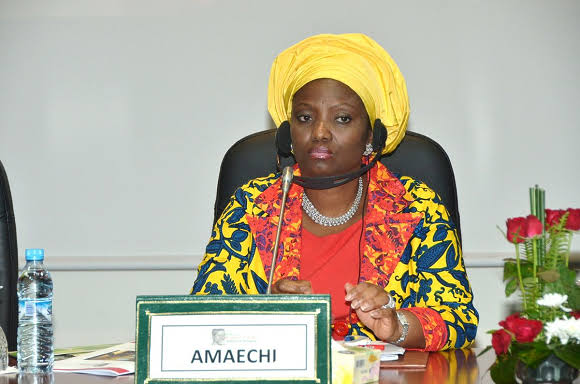 According to Daily Times, Nigeria’s Minister for Transport, Mr. Rotimi Amaechi is grappling to save his wife, Mrs. Judith Amaechi from probe over the looting of N48billion from a contract she received from the Niger Delta Development Commission, NDDC, when Nelson Brambaifa was the acting Managing Director.

Brambaifa, a lackey of Amaechi was appointed Acting MD of NDDC in January 2019. He was sacked in August of 2019 following allegations of
corruption in NDDC under his leadership.

Sources at the NDDC conversant with the deal told Pointblanknews.com that Mrs. Amaechi had through her Non for profit organization, Empowerment Support Initiatives, ESI, received a N70billion contract from the agency to train Niger Deltans in skills such as Tailoring, Soap making, Carpentry and others.

After the award of contract to ESI, sources told Pointblanknews.com that Mrs Amaechi’s wife received N48billion.

Mrs Amaechi’s ESI was a major contractor with the NDDC and she used Brambaifa who was nominated for the acting MD position in NDDC by her husband to collect several contracts running into billions most of which were never done, a source at the agency told pointblanknews.com.

A report of the scandalous contract has now been tabled before theAttorney General and Minister for Justice, Abubakar Malami, who in turn is alleged to have used it to threaten the Transport Minister.

Amaechi and Governor Ahmed Elrufai of Kaduna state are both eyeing the Presidency and Vice Presidency in 2023. They belong to a rival group in
the All Progressive Congress, APC, that is opposed to the Malami group.

Sources told Pointblanknews.com that the report of the N48billion contract from the NDDC is now being used to silence Amaechi and torpedoed his ambition.

“Amaechi now runs to Tunde, Buhari’s PA to help him lobby Malami so his wife is not prosecuted.

This is why Amaechi no longer talks tough or says anything to his supporters about 2023 or his ambition. He is very worried,” a source close to the Transport Minister told Pointblanknews.com.

According to the source, Amaechi is afraid that the Attorney General may use the documents of the looting in his custody either now or in the future to blackmail him.

While Nengite is currently facing prosecution by the Military, the rest are yet to be prosecuted.

Sources told pointblanknews.com that Brambaifa had told investigators when he was first interrogated by the Economic and Financial Crimes Commission, EFCC, that he gave N66billion to support Buhari’s Presidential Campaign in 2019.

The N66billion according to insiders was allegedly giving to Amaechi who was a member of the APC Presidential Campaign team.

In 2017, Amaechi told a Nigerian Television Station during an interview that he is not corrupt and don’t like money.

“I have told Nigerians and I repeat today that I am not corrupt and that I don’t like money. I am not one swayed by money.

“I have lived a character that most Nigerians can tell you.

“I try as much as possible not to annoy God by saying I am honest but with all modesty, I am an honest Nigerian, and there are very few honest
Nigerians.