I Worked As Bus Conductor To Build Our Church, But My Pastor's Wife Beat Me, Threw Me Out Of The Church - Pastor - IReporteronline

Wife: ‘I sold my late husband’s property to establish a church, but my present husband and his children in the bid to take the church from me, connived and inflicted me with stroke through diabolic means’ 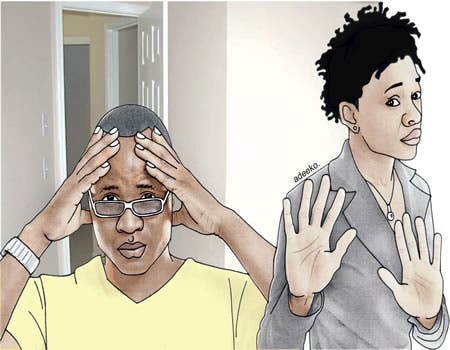 Husband: ‘My pastor-wife suddenly turned a terror in the home. She beat me, tore my ordination clothes and pictures and insist I hands off the supervision of our church’

These were part of the testimonies by a couple, Pastor Adebayo Bamidele and Evangelist Felicia Bamidele.

Adebayo, who brought a divorce suit against his wife, Felicia accused her of being stubborn and troublesome.

Adebayo stated that Felicia made his life miserable as a result of her irrational behaviour.

The plaintiff explained that he and the defendant never agreed on any issue because she is domineering in nature.

The plaintiff further accused the defendant of battery.

According to him, she beat him, tore his ordination clothe and pictures during an argument and restricted him from taking part in the operations of their church.

Adebayo stated that he had sought for peace in their union to no avail and that his coming to court was his last resort.

The plaintiff entreated the court to dissolve their union and restrain the defendant from further harassing or embarrassing him.

Felicia agreed to divorce but denied the allegation of battery brought against her by her husband.

Adebayo stated that, “My lord, I came to court because I realised it is the only way out of the predicament I am presently facing.

“Felicia was a widow when we met. We courted for a few months and went into marriage with the plan of starting a church.

“She agreed to sell her late husband’s property and give me a part of its proceeds to buy a piece of land on which we would build our church.

“We did this and she made herself overseer of the church while I was assisting her.

“It was then I realised how stubborn my wife is. She will never give consideration to my suggestions or counsels. Felicia is domineering in nature and loves to have her way all the time.

“We are always at loggerheads which wasn’t healthy for our calling and prospect of the church.

“We experienced a set-back when the government then requested that we vacate the land. We were left with no other option than to look for another piece of land but I didn’t have the wherewithal.

“We decided that my wife took a loan from a microfinance bank while I pay her back by working as a bus conductor in addition to carrying out other menial jobs.

“We started another church and stuck to our agreement, but she never ceased to dictate the tune.

“My son who is a member of a white garment church and has a calling on him showed interest in working with us but she refused.

“According to her, we are running a gospel church and not a white garment church which members spend days and weeks on mountains.

“We had a heated argument over this. It led into disaffection between us and this automatically took its toll on the prospect of the church.

“Felicia took to blackmailing me. She lied that I borrowed N200,000 from her and refused to pay back.

“She was always pretending she had no strength in her but would go wild and look fierce when angry and fighting me.

“Felicia would pounce on me and beat me to a pulp. On some occasions it was members of our congregation who would come to my rescue.

“She got furious on one of the days we were quarrelling and went for my ordination cloth and pictures. She tore them to shreds.

“My lord, it is true Felicia has no child for me but my children from my first marriage still need me. If I don’t end my wedlock with Felicia she will soon kill me,” Adebayo told the court.

Felicia giving her evidence said, “My lord, Adebayo and his children are rogues. They connived to get me out of the way and take over my church.

“I am also no more interested in our relationship. I agree to divorce.

“Adebayo is a dupe. I lent him N200,000 out of the profit I made from the sale of my late husband’s property, but he has refused to pay me back.

“I again lent him N60,000 during his son’s wedding but he has not refunded the money till date.

“He lied that I am troublesome and was in the habit of beating him. How can a woman of God like me fight or beat my husband?

“One year after we got married and started running our church, one of his children brought me a chicken but I refused to eat.

“I had a revelation she wanted to kill me. I was instructed by God to hit the chicken on the floor three times and throw it away. I did exactly this and thus averted the evil meant against me.

“She came back to our house a few days after, hoping to find me sick and about to die, but was shocked to find me looking hale and hearty.

“I again dreamt and saw another of his children at the back of our house. She wore a white bra and underskirt and blew a substance at me.

“I woke up and felt a cool breeze blow all over my body. Before I knew it, my fingers became numb while I couldn’t lift my right hand and leg. This attack resulted in stoke.

“My husband instead of taking me to the hospital took me to his friend’s church and abandoned there.

“He later took another wife who is now living with him.

“My lord, it took God’s intervention before I could use both my hand and leg again, “she concluded.

Giving his judgment, the court president, Chief Ademola Odunade observed that the relationship between both parties had gone sour.

Ruling, he dissolved their union and advised that both maintain peace.

My Husband Gave Me Blows, Removed My Teeth ’Cos He Failed To Perform In Bed – Woman Tells Court