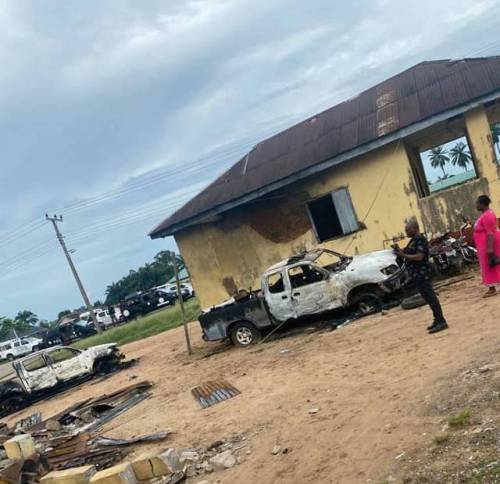 There was palpable at Ashaka community in the Ndokwa East Local Government Area of Delta State following explosions that rocked the station, leading to the burning of the station and vehicles.

The explosions occurred on Sunday morning and they were suspected to have been caused by improvised explosive devices (IEDs).

SaharaReporters learnt that the assailants were unknown gunmen who invaded the police station and set ablaze operational vehicles and other vehicles there.

All efforts by the men on duty to repel the hoodlums were resisted, it was learnt.

According to community sources, over 15 armed men invaded the station to carry out the attack.

Confirming the attack on the police station, the Delta state Police Public Relations Officer, (PPRO), DSP Bright Edafe, disclosed that the incident incurred in the early hours of Sunday.

“In the early hours of today, 6/6/21 at about 0100hours, some enemies of the community and that of the police all armed men numbering about 20 stormed Ashaka police station. They threw IEDs at the station, shot sporadically, and set the police station that was built by the community/DESOPADEC ablaze, and also burnt one patrol vehicle.

“The hoodlums who perpetrated this dastardly act will certainly not go free, as serious efforts are ongoing to arrest them and bring them to justice.”

JUST IN: “TB Joshua Was Irresponsible And Led A Toxic And Exploitative Ministry” – Ezekwesili