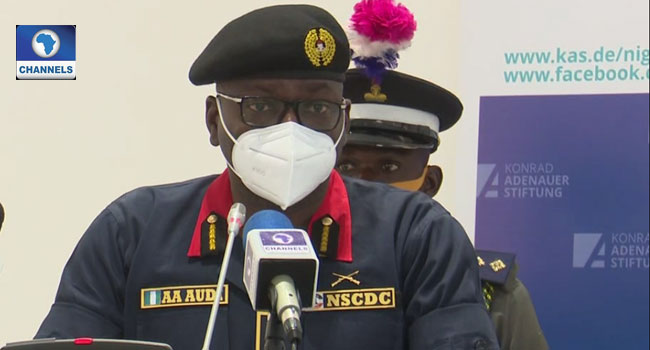 The Commandant-General of the Nigeria Security and Civil Defence Corps (NSCDC) Dr Ahmed Abubabar Audi, has ordered the immediate set-up of Rapid Response Squad in all the state commands of the Corps across the federation.

In a statement signed Thursday in Abuja by the Corps director of public relations  DCC Olushola Odumosu, the NSCDC boss gave the matching order during an orientation program organized for the newly promoted Commandants and serving State Commandants at the national headquarters of the Corps as part of efforts to rejig the activities of the organization and enhance the capabilities of officers and men in the states.
Audi said it became imperative to replicate his creation of the Rapid Response Squad in every state command to respond to all forms of crime and criminalities in real and quick time.

“This is aimed to ensure prompt and timely intervention in times of emergencies, disasters and unforeseen security breaches.”

According to him, the confidence reposed on the Corps by the Commander in Chief, President Muhammadu Buhari and the Nigerian citizens must be sustained and improved upon. He charged the State Commandants to beef up security in their respective States to forestall any breakdown of law and order before, during and after the Democracy Day celebration.

In his words ‘’power is not a gift but a responsibility and to whom much is given much is expected, you must be determined to clamp down on all bad elements in your area of assignment and avoid any tribal, religious and ethnic sentiment to justify your posting and prove your competence.”

He urged the Commandants to ensure the RRS adhere to all Standard Operating Procedures (SOPs) in line with International Best Practices and to rejuvenate the intelligence-gathering capabilities in order to address the security challenges peculiar to their area of assignment and the nation in general.