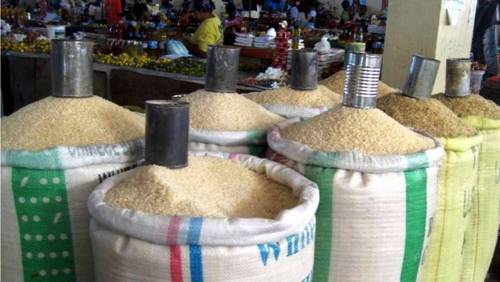 Food prices are beginning to rise at an alarming rate in most of the southern states as 1kg of Nigerian locally planted rice sells for about N290 in Nasarawa to Jigawa states but sells for around N950 in Lagos and Anambra states.

These figures were obtained by SaharaReporters from the Selected Food Prices Watch, May 2021, report released by the National Bureau of Statistics.

The same disparity goes for beans where people in Bauchi State buy 1kg for about N200, but in Anambra, the same quantity is sold for N670.

The NBS report confirmed that the price of rice increased by 17% in 2021 from what Nigerians bought in 2020.

The report noted that the prices of foodstuffs were “collected across all the 774 local governments across all states and the Federal Capital Territory from over 10,000 respondents and locations and reflect actual prices households state they actually bought those items.”

Checks by the source revealed that the same goes for prices of yams and potatoes nationwide.

According to the survey by the NBS, a tuber of yam is highest in Ekiti with N563 and lowest in Taraba with N102, while potatoes are highest in Akwa Ibom with N312, while they are N94 in Borno per a group of tubers.

“Field work is done solely by over 700 NBS Staff in all states of the federation supported by supervisors who are monitored by internal and external observers. The average of all these prices is then reported for each state and the average for the country is the average for the state.”