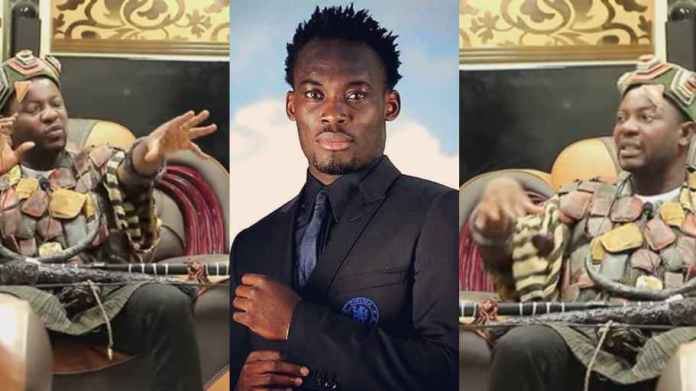 Speaking on Vibes in 5 with Arnold Mensah Elavanyo, the Spiritualist, who claims he worked with about 50 players said he is responsible for the downfall of the midfielder.

“I handle about 50 Ghanaian footballers, some of who are currently plying their trades abroad. But I’ve caused the downfall of the players who didn’t appreciate my services,” he said.

“Essien promised to buy me a house in Accra if I helped his football career to blossom. He didn’t deliver on the promise so I brought him down.”

Watch the full interview below :

It is unknown whether the spiritualist’s claims are true, but Essien enjoyed a hugely successful career before venturing into management.

The former Real Madrid and Chelsea midfielder joined Danish side Nordsjaelland last year as one of their first-team assistant coaches.

Essien enjoyed a trophy-laden career that lasted over a decade and a half following his breakout year at Lyon, where he won two Ligue 1 titles.

Read Also Blessing Or A Curse? [Pt.4] See What This Lady Is Carrying On Her Chest (Photo)

He became Chelsea’s record signing when the club forked out £24.4 million to price him away from Lyon in 2005.

He spent almost a decade at Stamford Bridge, helping the Blues to win multiple Premier League and FA Cup titles, as well as the UEFA Champions League in 2012.

In an interview last year, Essien said he never thought he would become a coach but believes he has a lot to impart on the younger generation of players.