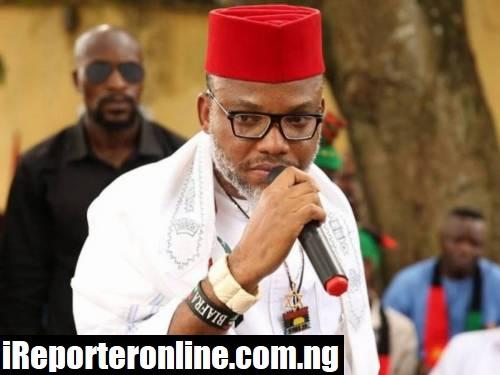 Igbo National Movement has asked the Federal Government to disclose the country that the leader of the Indigenous People of Biafra, Nnamdi Kanu, was arrested.

The group made the demand in a statement by its president, Anthony Olisa Okolo; and Legal Adviser, Eze Eluchie.

Apart from faulting the Federal Government for arresting Kanu, the group accused the President, Major General Muhammadu (retd.), of leading the country into a lawless state.

According to the Igbo group, Nigerians deserve to know the country Nnamdi Kanu is arrested.

Part of the statement read in part, “The current leadership of Nigeria is quickly turning the Federation into a pariah state, known only for lawlessness and corrupt purpose.

“In view of the multiplicity of accounts of the manner in which Mazi Kanu was ‘abducted’, some of which accounts have led the British and Kenyan Governments, to forcefully deny their involvement in any state-sponsored acts, it has become pertinent for the Presidency to come clean to its citizens and clarify exactly how this abduction was carried out in international territory, outside the jurisdiction of the Nigerian State.

“It cannot be lost to the Attorney-General that such unlawful arrest could vitiate any legal proceedings which emanate from it and paints Nigeria and its citizens in the least favourable light that can possibly be expected within a law-abiding international community.

“Considering that Mazi Kanu was brought into the country on Sunday preceding the conferences, as announced by the AGF, the failure of the Government to notify his Legal Representatives and his Family of the date for his arraignment almost 48 hours later, supposedly before a Federal High Court in Abuja, shows ill intent and already is a breach of the accused’s fundamental human rights.”

Kanu, who is facing an 11-count charge of treason, treasonable felony, terrorism and illegal possession of firearms, among others, jumped bail in 2017 and left the country.

The former London estate agent disappeared in 2017 after being released on bail, only to re-emerge in Israel and then in the United Kingdom.

He was re-arraigned before a Federal High Court in Abuja on Tuesday and ordered to be remanded in the custody of the DSS, while the case was adjourned till July 26 and July 27.

The Federal Government said security and intelligence agencies were on the trail of Kanu for over two years before he was re-arrested, adding that the head of the outlawed IPOB movement was detained again on Sunday – without giving details on the location of his arrest.

Kanu was initially arrested in late 2015 after calling for a separate state for Biafra, in South-East Nigeria.

His detention sparked mass protests and clashes with security services.

IPOB, which agitates for a separate Igbo state, has denied being behind the violence, accusing the government of a smear campaign. Election offices have also been attacked by suspected members of the group.
Kindly Share This
Dear Reader, Fetching good and credible news information is tedious and requires huge finance. We are soliciting support from our readers and fans. For as low as N1,000  you can be a part of our golden membership. Your support would go a long way in assisting us to continue guaranteeing quality news to our readers across the globe. Bank transfers can be made to: Zenith Bank 1014932118 Ireporteronline communications Inquiries: Email: [email protected] Whatsapp: +234 7032341798 FOR BUSSINESS ADVERT CLICK THE WHATSAPP IMAGE BELOW