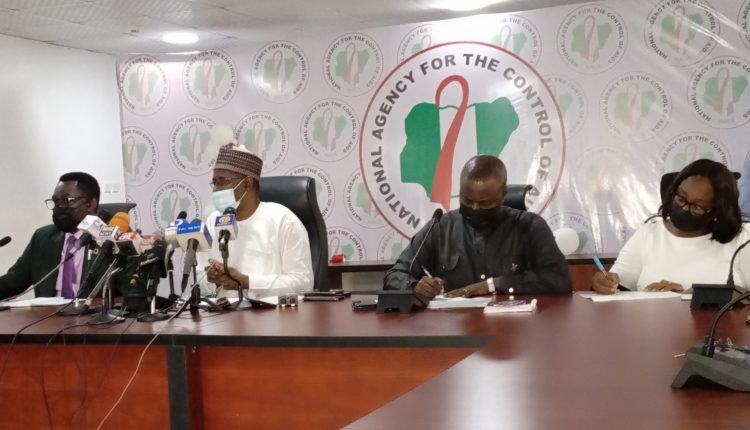 The National Agency for the Control of Aids (NACA), says a new research “Estimating Modes of HIV Transmission in Nigeria”, has identified never married adults and key population as increasing HIV rates in Nigeria.

The Director General of the agency, Dr. Gambo Aliyu, disclosed the statistics in Abuja.

He said that the research gives estimates of where new HIV infections are occurring and can aid prevention planning and focus efforts where they will be most effective.

He said that the distribution of new infections varies by state.

“However, a large proportion of new infections generally  occur among never married individuals or in Sero-concordant negative couples. Overall, young people and Female Sex Workers appear to be playing an important role in the dynamics of the incidence.

“A study of  formation and dissolution of partnerships among these groups may help understanding this dynamic. Mother to-child transmission represents a large source of new infections nationally and is the largest source in several states. Most of those women who do attend ANC get tested for HIV but over 60% of pregnant women do not attend ANC. Increasing ANC attendance would have benefits not only for reducing HIV transmission,” He said.

According to Dr. Aliyu, the National Agency for the Control of AIDS (NACA), in collaboration with development partners, has been working tirelessly in coming up with strategies to halt the spread of the HIV virus and sustain the epidemic.

“To this end, the Mode of Transmission Study (MOT), which focuses on identifying the sources of new HIV infections in the country and was first conducted in 2009, was recently repeated using an updated model known as the Incidence Pattern Model. This was done to support efforts geared towards preventing new HIV infections using information that was accurate and clearly show where new infections are occurring and among which population group“. He noted.

The Director General also said that it was noteworthy to state that data from the 2018 Nigeria AIDS Indicator Impact Survey (NAIIS) supplied most of the information on population size and characteristics used for the study. The Key population (KP) size, prevalence rate for Key Populations and the number of new infections by State spread were estimated from the recent KP study.

He noted that though Nigeria is working hard to close these gaps, the findings of the study will further help NACA and partners redirect resources for maximum yields as they look forward to attaining epidemic control with more targeted interventions.

“The policy implications is that efforts will be made to target the following population groups:

The survey also announced a decrease of HIV prevalence amongst married couples in Nigeria while noting that Mother to Child Transmission stands at 22%.

JUST IN: Okorocha Reacts As Court Orders Final Forfeiture Of His Properties