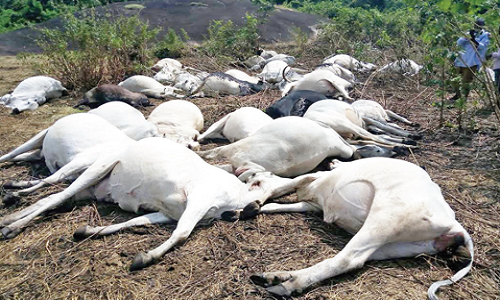 Over twelve cows were reported to have been killed following a thunder strike in the Urhodo-Ovu community of the Ethiope East local government area of Delta State.

A source who pleaded anonymity said the herdsmen were seated close to the cows while others were taken to another area of the bush for grazing when the thunder struck over twelve of the cows.

The source had explained that the thunderstruck the cows after a brief rain, adding that not quite a few minutes that the cows dropped dead that their stomach got swollen.

The source revealed that the strange death of the cows by the thunder sent fear in the minds of the herders who after the incident took to their heels and later returned.

It was learnt that before the day of the incident, the farm owners had at several times warned the herders to stop taking their cows to their cassava farm but they didn’t listen until the ugly incident happened.

The incident which attracted people from neighbouring villages who expressed their feelings said they are still in shock over the incident, adding that this will be a warning to the herders who take their cows to destroy farmlands.

Against the rumour making the round that the incident may be connected with black power, another source said a similar incident had also occurred in other towns and communities, that this one is not different.