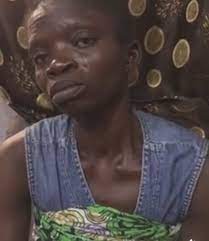 She was also the first of four children by her parents, her mother, Ifeoluwa Oyeleke, stated.

Jumoke had met her end when agitators for the Yoruba Nation gathered at the Gani Fawehinmi Park in the Ojota area of Lagos on Saturday amid heavy presence of armed policemen and soldiers.

Some of the operatives reportedly fired gunshots, tear gas canisters and water cannons to disperse the demonstrators and journalists shortly after the rally took off.

Jumoke was reported to be displaying drinks at her boss’ shop in a compound close to the rally ground when security men chased some agitators into the premises amid shootings.

She was said to have been hit by a stray bullet, which ripped through her stomach and left a deep hole.

Her corpse was later taken away in a police van.

Following the incident, it was widely circulated that the victim was 14 years old.

However, her widowed mother has revealed to PUNCH Metro that the victim was 25 years old and not 14, noting that people mistook her for a teenager “because of her small stature.”

During a visit to her parents’ house on Sunday by The PUNCH, the mother, Ifeoluwa Oyeleke, had said that Jumoke was her first child.

“Jumoke is my first child and she was a very healthy and good child; a very hard-working girl that won’t complain if you asked her to do anything.

“She said she wanted to save money from the job she was doing so she could own her shop and become a better person in life, but that dream has been cut short now,” the tearful mother had said.

While pleading for justice for her slain daughter, Ifeoluwa also revealed that Jumoke had been responsible for the upkeep of her three siblings, all girls, noting that their dad “was no more.”

“I want the state government to fight for me and render whatever help they can to me. It has not been easy since yesterday; it has affected me in every way because she’s the one helping to cater for her siblings.”

Jumoke’s uncle, Wasiu Afolabi, told PUNCH Metro that the family got to know about the incident through the social media.

He also provided a photograph of the slain young woman.