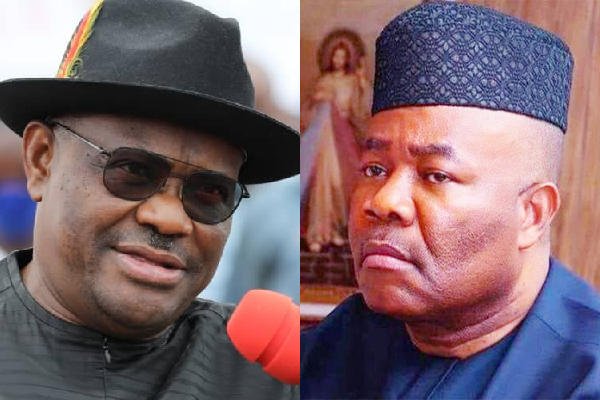 The event was the official inauguration of the Muhammadu Buhari Nigeria Police Protection Unit comprising 68 flats and other facilities built in Port Harcourt, Rivers State by the Niger Delta Development Commission (NDDC).

Vice President Yemi Osibanjo represented Buhari at the event, which was attended by Wike, Akpabio, the Minister of Police Affairs, Muhammad Maigari Dingyadi; the Inspector-General of Police, Alkali Usman; Chairman, Senate Committee, Senator Peter Nwaoboshi and his counterpart in the House of Representatives, Olubunmi Tunji-Ojo among others.

Akpabio stirred the hornet’s nest when he cited the crisis in the All Progressives Congress (APC) as the reason why we would not join other party bigwigs to appeal to Wike to defect to the APC.

Addressing Wike, he said: “I will not join others to lobby you to the APC. We have enough problems in the APC already”.

The Minister, while later alluding to the encomiums poured on Wike by Tunji-Ojo following his performance in Rivers, however, made a U-turn saying he could only declare Wike a performing Governor if he joined the APC.

But Wike, who spoke immediately after Akpabio, wondered why the Minister turned the inauguration into a political campaign.

The Governor, juxtaposing the crises in the Peoples Democratic Party (PDP) and the APC, said he would not leave “where there is malaria to a place where there is cancer”.

He said: “I thought we came to inaugurate this project. I didn’t know Akpabio will turn it into a political campaign. I prefer to stay where there is malaria to where there is cancer. Malaria is treatable but cancer at the fourth stage is not treatable. I don’t want to die now”.

Wike, who refused to acknowledge Akpabio as a Minister in his order of protocol, referred to him as a former Governor.

He said Akpabio enjoyed the title, uncommon when he was a Governor under the PDP.