Kindly Share This
The meeting is holding in the Palace of a prominent monarch in Adjohoun, which is about 60 kilometres away from Ajase. 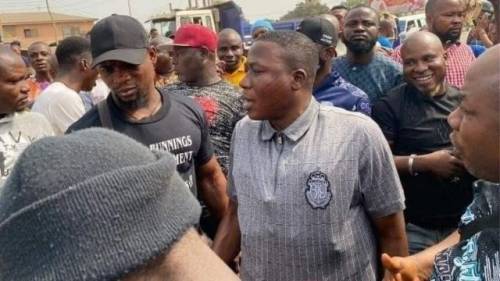 The PUNCH reports that Yoruba monarchs in Benin Republic, on Sunday, met over the arrest and detention of Yoruba Nation agitator, Sunday Adeyemo, popularly known as Sunday Igboho.

The meeting is holding in the Palace of a prominent monarch in Adjohoun, which is about 60 kilometres away from Ajase.

Among those present at the meeting are Alajashe of Ajase from Port Novo, Alajohoun of Adjohoun, and the representative of the Oba of Benin.

The Beninese court adjourned Igboho’s case till Monday after his five lawyers failed to convince the prosecutor that he had no case to answer.

The Beninese authorities have, however, released Ropo, the agitator’s wife, who was arrested with the 48-year-old activist on Monday, July 19, 2021, by the International Criminal Police Organisation at the Cadjèhoun Airport in Cotonou, the Republic of Benin on their way to Germany.

On his part, Igboho was returned to police custody.

The lawyers had said that during the hearing, prosecutors claimed Igboho was on a watchlist for alleged trafficking in arms, inciting violence that could result in social disturbance and causing disunity in Nigeria.