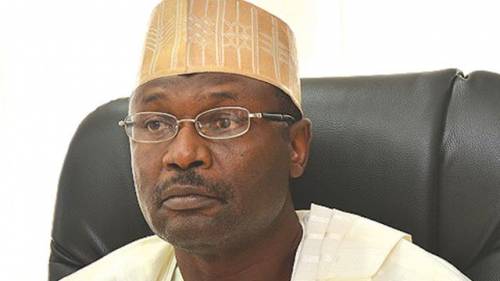 The Independent National Electoral Commission on Wednesday said it had discovered 1,390,519 invalid registrations in the ongoing Continuous Voter Registration.

The commission also said the figure amounted to 45 per cent of the 2,523,458 completed registration.

The chairman of INEC, Prof. Mahmood Yakubu, said these during a press conference in Abuja.

According to him, the figure was from completed registration starting from June 2021 to January 14, 2022.

He said the country was now in the fourth quarter of the ongoing Continuous Voter Registration which was restarted on June 28, 2021, after it was suspended for the 2019 general election.

While describing the development as worrisome, the INEC boss cited multiple registration, failure of Automated Biometric Identification System and incomplete data as the reasons for the invalid voter registrations.

Yakubu who said the infraction happened in all states of the federation, insisted that the invalid registrations will not be included in the register of voters.

He said while the number of new registrants was impressive, the commission has a duty to clean up the data to ensure that only eligible Nigerians are registered.

Yakubu said, “Sadly, it seems that many registrants, either out of ignorance that they do not need to re-register if they had done so before, or a belief that our systems will not detect this infraction, have gone out to register again. This is despite repeated warnings by the commission against this illegal action.

“In addition, there are also registrants whose data were incomplete and did not meet our Business Rules for inclusion in the register. Both categories i.e. the failure of ABIS and incomplete data constitute invalid registrations.

“Presently, nearly 45 per cent of completed registrations nationwide are invalid, rising to as high as 60 per cent or more in some states. This infraction happened in all states of the federation. No state is immune from it. These invalid registrations will not be included in the register of voters.

“This development is worrisome because of the time and resources expended in handling these cases. Even more disturbing are the strong indications that some of our staff members may be complicit in facilitating these infractions, notwithstanding stern warnings.

“Consequently, the commission is reviewing reports on such staff members and has commenced a detailed investigation which may include the prosecution of those found culpable.”

He said specific registrants associated with the infractions by the commission’s staff may also face prosecution in line with Sections 22 and 23 of the Electoral Act 2022.

‘It is precisely the introduction of this more robust system that has enabled us to improve our ability to detect these invalid registrants. However, we also suspect that some of these invalid registrations may have arisen out of ignorance. Consequently, the Commission is establishing a dedicated Help Desk for people who need information about the CVR”, he added.

Yakubu also said about 1,390,519 PVCs for genuine new registrants have been printed, adding that 464,340 PVCs for verified applicants for transfer or replacement of cards have also been printed.

“Consequently, a total of 1,854,859 PVCs are now ready. They will be delivered to our State offices across the country over the Easter holiday. They will be available for collection by the actual owners in person immediately after the holiday.

“No PVC will be collected by proxy. I must reiterate that the available cards only cover those who registered in the First and Second Quarters of the exercise”, Yakubu said.

Meanwhile, following the discovery, about 106,280 voters in Ekiti and Osun states were disqualified due to invalid registration ahead of the governorship elections in the two states.

Yakubu however assured tall hat all registered voters in Osun and Ekiti states would have their PVCs ready before the governorship elections in the two states.

Speaking on political parties’ primaries, Yakubu maintained that the dates for all activities in the timetable and schedule of activities for the 2023 general election, including the conduct of party primaries, were firm and fixed.

According to him, only 10 political parties have served notices to the commission for the conduct of their primaries.

“With 52 days to the last day for the conduct of primaries, that is June 3 2022, political parties are once again admonished to adhere strictly to all dates in the timetable, including the nomination of their candidates via the INEC web portal.

“Such nominated candidates must emerge from valid primaries as provided in Section 84 of the Electoral Act 2022. This is necessary to avoid the unhappy consequences of any breach of the commission’s timetable or the Electoral Act”, he stated.

The National Leader of the All Progressives Congress (APC), Bola Ahmed Tinubu, had earlier this year raised concern over the PVCs in the country.

Tinubu, who addressed some women leaders who paid him a visit in Abuja, said the PVCs in the possession of Nigerians had expired.

But the commission quickly countered the ex-Lagos State governor and demanded a public apology for misinforming Nigerians.