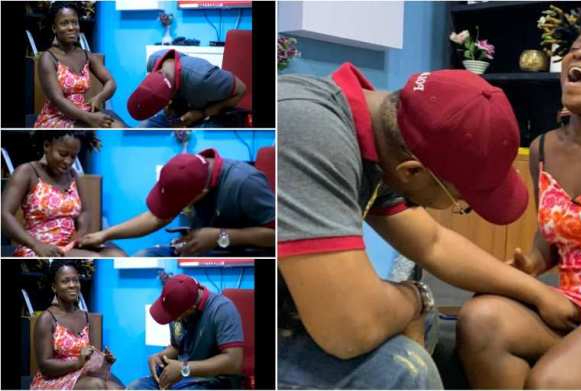 Budding Ghanaian artiste, Empress Vee has caused massive stir on social media when she did the unthinkable with a presenter on live television.

Empress Vee is a young Ghanaian who aspires to be inducted into the Ghanaian Hall of Fame.

She began her musical career in church, where she sang for about seven years and continues to sing at other events.

The Ghanaian musician recently released a song titled ‘Me nant3m’. It’s an Akan term which means “between my legs”

Her brand style is quiet similar to Wan Luv Kobolo who refuses to wear anything like shoes and boxers among others.

Empress Vee’s case is different. She has decided not to put on any bra or any short wears. When she was asked the reason, she said “it’s normal for her family, both her mum and other siblings do same.”

During the interview, she was questioned if she could show that she is truly pant-less.

The video below demonstrates how she turned her garment for the interviewer to verify that what she said was real.