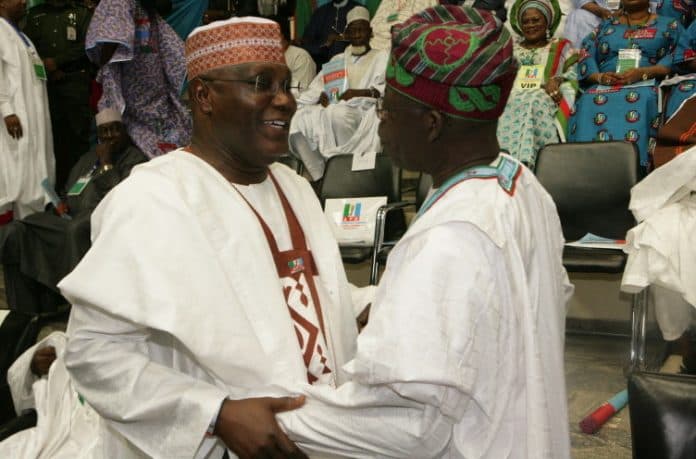 Chief Bisi Akande, former Interim Chairman of the All Progressives Congress (APC), has claimed that ex-Vice-President Atiku Abubakar made financial demands from Bola Tinubu, National Leader of the ruling party, when he took a shot at the highest office in the land in 2007.

Atiku, who fell out with former President Olusegun Obasanjo in the bid to succeed him, later clinched the presidential ticket of Action Congress (AC), a party that Tinubu was instrumental to its formation after the political “Tsunami” that hit Alliance for Democracy (AD) governors who were elected in 1999.

Of all the AD governors elected in the South West 1999, none but Tinubu was re-elected as a result of the PDP incursion believed to have been spearheaded by Obasanjo.

Towards the end of his second term as governor of Lagos, Tinubu laid the groundwork for the establishment of AC, the platform on which Babatunde Fashola, incumbent Minister of Works and Housing, was elected as his successor.

During the running battle with Obasanjo, Atiku defected from the PDP and clinched the AC presidential ticket.

However, he came a distant third in the election, which was won by the late President Umaru Musa Yar’Adua, President Muhammadu Buhari of the then All Nigerians Peoples Party (ANPP) came second.

The AC had put up a force in the National Assembly, where it won 32 out of 360 seats in the House of Representatives and 6 out of 109 seats in the Senate.

In “My Participations”, his autobiography, Akande, who was also the National Chairman of AC, narrated some behind the scenes incidents of the 2007 elections.

Akande said Tinubu would have been Atiku’s running mate before the party settled for the choice of Ben Obi.

“In 2007, we formed a party, the AC, with Abubakar Atiku. We agreed that Atiku should be our presidential candidate and we had the understanding that he would run with Bola Tinubu. I was the chairman of the AC. One day, after we had nominated Atiku as our presidential candidate, one young man came and gave me a form from INEC. I told him I could not sign a blank form and that I, as the Chairman, must know the name that would be filled in it.

“The young man, Bashir Yusuf Ibrahim, must have been the organising right-hand man of Atiku. He was an active person from Kano. The following morning, he came again with Lawan Kaita. Kaita begged me and said it was Ben Obi’s whom Atiku had chosen as his running mate behind our back. So, I signed the form because I believed as the candidate, Atiku had the right to choose his running-mate. If I refused to sign, that would create a crisis.

“We believed that Atiku should have chosen his running mate from the AD even if he was no longer favourably disposed to Tinubu. With Atiku, the party would be strong in the North, but because of the preponderance of PDP in the South-East and the South-South, it would face more resistance in that area. Obasanjo was stepping down from the Presidency. Therefore, the Yoruba, even the few that benefitted from his arrogant rule, would no longer be obliged to vote for the PDP.

“Segun Osoba, Niyi Adebayo and Lam Adesina had earlier met Atiku and we proposed to him our choice of Tinubu, and he promised to come back to us. He gave us a date. On that date, we all assembled. Atiku came with Audu Ogbe, Tom Ikimi and Usman Bugaje.

“We proposed that Tinubu should be the running mate, though Tinubu was not at the meeting. Atiku would not give us an immediate answer. He said he wanted to have more consultations.

“Ikimi, Ogbe and others were all very strong against Tinubu, because they said it would mean a Muslim-Muslim ticket. We deadlocked over that. Atiku never said anything. We left the meeting. What prompted us was that anytime we said we needed money, Atiku would say ‘Bola, please help us’. Bola was the only one spending the money among us. The rest of us were poor. Tinubu also put all his energy and resources into the formation of the AC and we felt he deserved a spot on the ticket. We discussed with Bola on this and he said we should discuss with Atiku. It was after we were deadlocked that they brought me the blank form. So, Atiku ran with Obi and failed. Only Lagos State from South West voted for Atiku in all the states of Nigeria.”

When Daily Trust contacted Atiku’s camp for a reaction, Paul Ibe, spokesman of the former vice-president, said, “There’s no big deal in that.”

He also criticised Akande, insinuating that he did not put the issue in proper perspective.

“When people are recounting history, it must be put in proper perspective otherwise it would amount to mischief!” Ibe said.

JUST IN: Tears As Another Traditional Ruler Dies (Photo)