JUST IN: Tears As Another Traditional Ruler Dies (Photo) 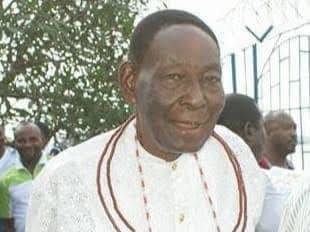 Chief Isaac Jemide, the Oshodi of Warri Kingdom is dead.

He was the Oshodi of Warri Kingdom and one of the seven founding members of Rotary Club of Warri.

“With a heavy heart, I wish to notify the passing on unto glory of my uncle, one of Itsekiri Leaders of Thought, Chief Barr. Isaac Omirestuli Jemide (The Oshodi of Warri kingdom). He passed on this morning. May his soul rest in peace,” a member of the Jemide family of Warri Kingdom had announced.

said, “Dear Ojoyes, it’s another sad day for the Council.

“We received with deep shock the sudden passing of our amiable Chief Isaac Jemide (Ikeri).

“He passed on this morning at 10.00am as advised by his family.

“Council plans to pay a condolence visit to His family on Tuesday 14th December 2021.

“All Chiefs are encouraged to be gathered at Council Chambers at 10.00am on that date, for a visit scheduled for 11.00am at his residence, Okoro Street, Marine Quater’s, Warri.

“Our heart goes out with his family at this time.”

The late Chief Jemide was at a time the Commissioner representing Delta State on the board of the defunct Oil Mineral Producing Areas Development Commission (OMPADEC).