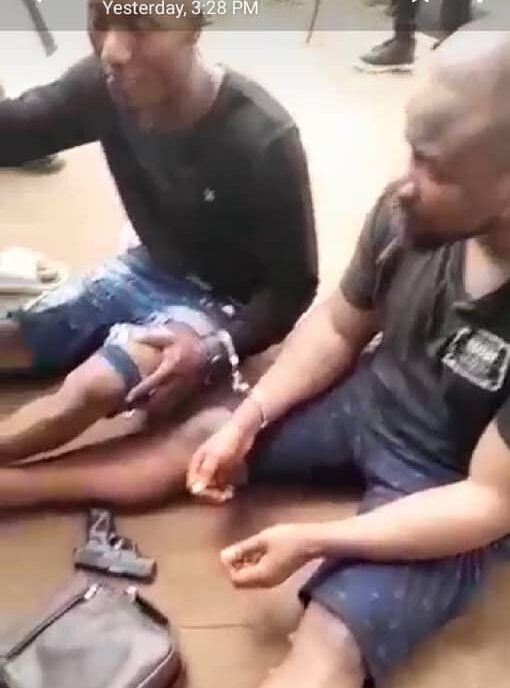 Weeks ago a viral video was making the rounds alleging that members of the Edo State Vigilante Network had arrested a young man who attempted to rob a POS shop in Benin City, in the said video the young man was seen with a firearm and was paraded as a robbery suspect by members of the State VGN, it was thereafter widely circulated on social media.

Further investigations have revealed the identity of the man in the said video and what truly transpired that led to the false accusations levelled against him. The man in the video is an American returnee by the name of Mr Larry Odigie.

Here is an understanding of what transpired on the ill-fateful day, earlier before the said date the accused went to a POS shop at Zabayor to withdraw a certain amount of money to help purchase a mattress(foam) for his guest at home. After the withdrawal, he asked some youths around where he could purchase the mattress and he was directed to a shop nearby.

On meeting the shop owner an altercation occurred and he was frightened by some group of boys around, feeling intimidated and scared Mr Larry Odigie brought out his personal firearm as a means to forestall any attack on his personality.

Unfortunately for Mr Larry Odigie members of the State vigilante were alerted to the scene and immediately pounced on the America returnee who came into Benin City some few days earlier to attend the marriage ceremony of his relation.

He was beaten, handcuffed, and had his head broken with bottles which later made him develop several lacerations and subconjunctival hematoma requiring a head CT scan two days later.

The state vigilante members in a bid to claim glory for the fight against criminality in the state unprofessionally paraded the American returnee as an armed robbery suspect which unfortunately has cast a dark cloud around his personality.

The general public is advised to disregard the erroneous report as it only smacked off an unprofessional display from the members of Edo State Vigilante which intent was to malign the personality of Mr Larry Odigie.

According to the POS owner, Mr. Yahaya the American returnee never intended to rob him at his shop as it was a misunderstanding that led to the faceoff, he further stated that all efforts for him to appeal to the members of the State Vigilante that Mr. Larry Odigie was not an armed robber fell on deaf ears and unfortunately the members of the VGN still went ahead to make a video and circulate same on social media.

Further investigations by the police authorities have since vindicated Mr Larry Odigie after testimonies from the POS owner, Mr Yahaya and eyewitnesses confirmed that the American returnee was not an armed robber.

Agba felicitates Omo-Agege at 58, says he is a political juggernaut

PDP CRISIS: “I will dump PDP if Secondus does not resign” – National Youth leader, Okoye