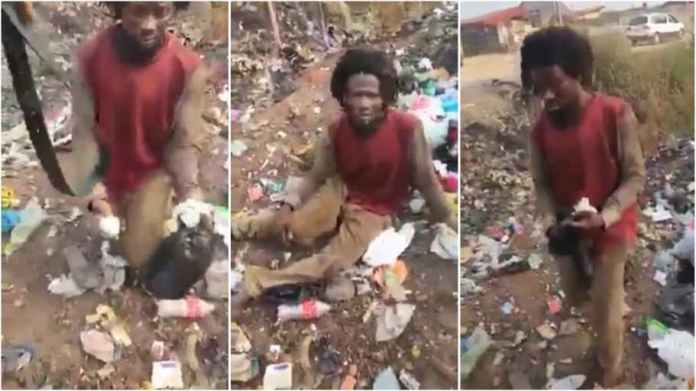 A video sighted on Instagram captured the man looking unkempt from head to toe like a truly mentally challenged person who hasn’t taken his shower for several months.

The fake mad man was seen with a black polythene bag containing used sanitary pads and diapers he had gathered using his smart modus operandi.

According to reports accompanying the video gaining online prominence, the man was said to have disguised himself as a mad man so he can be able to steal the diapers and pad without been recognized or seen by people who knew him around that area.

But luck eluded him as a woman who allegedly knew him raised alarm which drew the attention of people around to the scene.

Read Also Lady Set Her Big Backside For Her Man To …….. (Video)

After he was accosted by some angry youth in the area, he confessed that he was instructed by a fetish priest to collect the waste items for them to be used for rituals to make him rich.