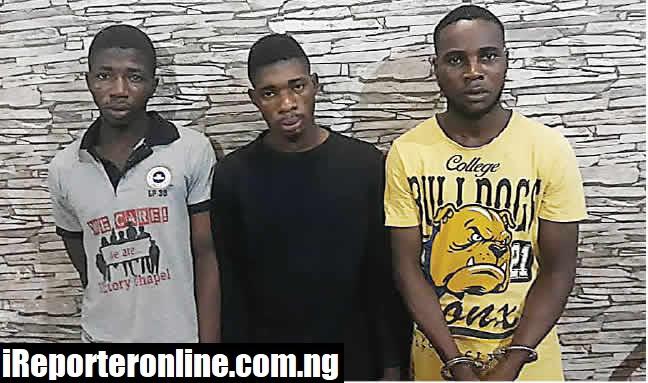 According to a report by The PUNCH, no less than three suspected members of a robbery gang operating in Ayobo, Ishefu, Baruwa and Gowon Estate areas of Lagos State, have been nabbed for allegedly dispossessing a United Kingdom returnee and his neighbour of cash and other valuables estimated at N14m.

The UK returnee identified simply as Tobi and his next-door neighbour, Okeowo, were reportedly attacked about two weeks apart on Gemade Estate located within Gowon Estate.

One Aje, the kingpin said to be at large, reportedly led the suspects, Sheyi Olayiwola, Sadiq Adeniji and Maduka Godwin, to the two operations.

It was learnt that Aje alerted his gang shortly after Tobi returned from the UK in December 2020 and they stormed the victim’s house on the night of December 18, carting away naira notes and foreign currencies estimated at N1m.

The police also said the gang reportedly made away with seven iPhones, expensive jewellery and laptops valued at N10m.

“They gained access into Tobi’s compound through the fence and broke his kitchen burglary before going into the house to rob him with his own knives, carting away N1m, both local and foreign currencies, seven pieces of iPhone 12 Pro-Max and expensive jewellery valued at N10m.

“Two weeks after that incident, On January 4, 2021, the suspects returned to Gemade Estate. They robbed the home of one Mr. Okeowo, who is next to Tobi, using the same pattern. They carted away valuables worth over N4m,” a police report said.

It was gathered that operatives of the Inspector-General of Police Intelligence Response Team went after the gang after a petition was addressed to the IG, Mohammed Adamu.

The detectives reportedly traced three members of the gang to their hideout at Ikotun Market, where they were arrested.

Narrating his role in the gang, Adeniji, 23, said he participated in the raid on Tobi’s home, but did not mention his actual share of the proceeds.

He said, “I am a tyre repairer and married with a child. It was one Aje whom I met in Ikotun Market that initiated me into the gang.  It was Aje that led us to that Gemade Estate. He had lived in that area. He called us to go to the house of the man who just returned from London.


“Everybody went away with what they took from his house. I don’t know the total value of what we sold but I made good money from the operation.”

Godwin, 19, said he had run away from his father’s house in Ojo to join the gang in Ikotun, adding that they targeted phones and cash in their operations.

He added, “We usually sold the stolen phones at the Akala area in Mushin. Aje is the leader of our gang and he is also the person who identifies where we would rob.


“We don’t use guns. In the daytime, we would gamble with the money we made from robbery and by night, we would group ourselves and visit any house we think the owners are rich and have valuables.”

Twenty-eight-year-old Olayiwola, who is married with two children, denied participating in Gemade Estate’s robberies but admitted to having followed the gang to six other robberies at Ayobo, Ishefun and Baruwa areas.

He said, “We carried out those robberies after breaking into the houses from the windows. I got a total of N250, 000 as my shares after the operations.”

Obaseki Vs Oshiomhole: How Ego May Stall Development In Edo State As Oshiomhole Triggers Internet Sensation