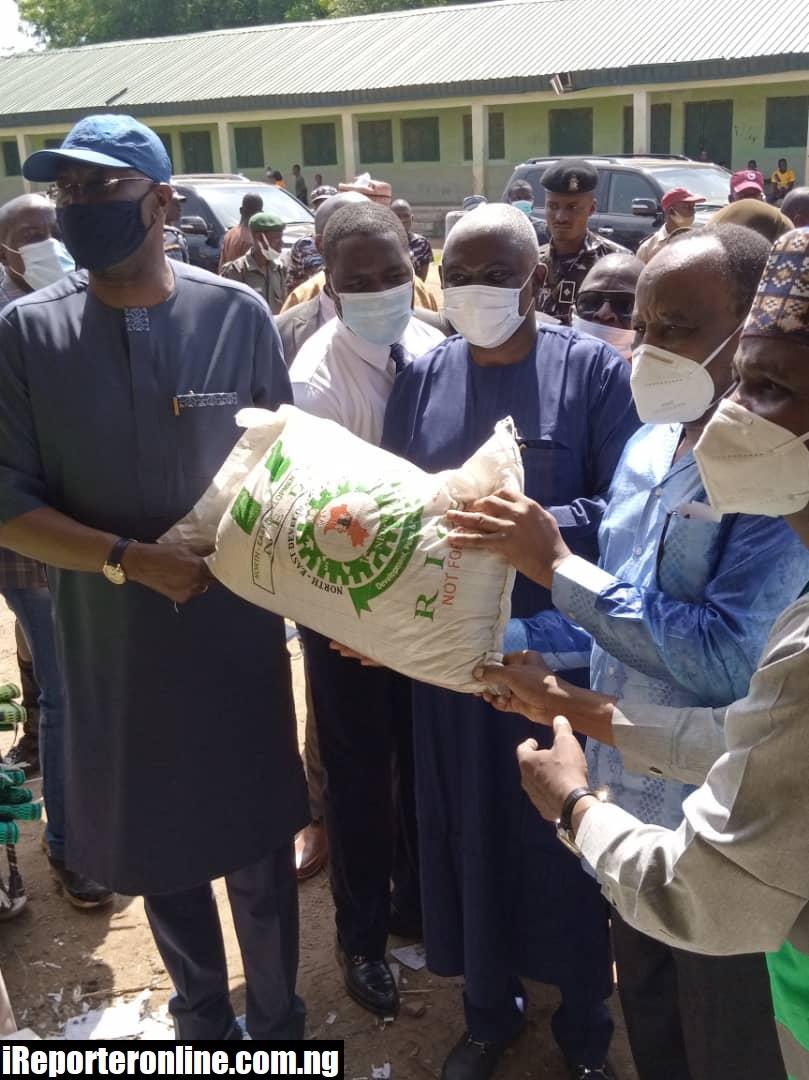 SGF MUSTAPHA,BUBA UNDERTAKE VISIT TO DABNA, DONATE RELIEF MATERIALS AS THEY EXPRESS SYMPATHIES WITH THE BEREAVED AND VICTIMS OF WEDNESDAY ATTACK.

The Secretary to the Government of the Federation,Boss Mustapha, and the Member representing Gombi /Hong Federal Constituency,House of Representatives ,Rt.Hon.( Dr.) Yusuf Buba Yakub, have called on the people of Dabna community,who were recently attacked by gunmen suspected to be bandits, not to lose faith in Government’s capability to protect their land,but to see what has befallen them as an act of God.

The duo stated this on Saturday in the area while commiserating with the people over the loss of loved ones,farmlands and properties in the dastardly act of the marauders who last Wednesday visited mayhem on the town,which led to the loss of several lives and maiming of half a dozen others in the peace- loving community.

While providing the bereaved and other victims of the attack,who are in a health facility in a neighbouring community,with various forms of relief materials and nutritional support for the internally displaced persons,the Government officials promised them various lifelines that would go a long way at assuaging the pains of the losses they have been forced to bear. Some of these lifelines include ; scholarship for children of the bereaved, settlement of hospital bills and various other support for businesses lost in the attack and families that have lost their breadwinners or/ and their homes.

Speaking at Dabna during the visit ,Buba expressed sorrow at what had befallen the community ,while pledging the support of the Federal Government and other State actors for the people. In his words ,the lawmaker said:
“We have come to console with you on the great losses that you have suffered as a result of this unfortunate incident. The Presidency and the whole world are aware of this. This is why we have come as part of the delegation of our elder brother here,the Secretary to the Government of the Federation,who himself is representing our dear President.

” Government has promised to ensure that this type of incidents does not occur again. All of us who are stakeholders here have come from different areas of Government, including the Presidency,the Legislature and even the Military,represented by the Brigade Commander sitted here,who himself is a son of this area. We will do all the needful to ensure that these dark moments never occur again. As the Hakimi pointed out while speaking on the engagement of members of the vigilante in the protection of the community, there is a Bill pending before the House of Representatives on the issue. I can assure you, once its nitty- gritty is all worked out so that Government can properly engage and give them remuneration,we will see everything in action. For now ,I encourage the youths to be up and doing; stay alert and report whatever you suspect to the security Agencies here. We will all do our best as stakeholders here; including the MD of Northeast Development Commission,who is also here and who I am sure will send relief materials to you when we leave here.”

Earlier,the Hakimi of Dabna ,in his speech,had called on Government for sundry support and to empower their youths to take up the assignment of protecting their land as members of various vigilante groups in the area.

The delegation,which was in Dabna also visited Garaha and the General Hospital,Hong,where some of the victims of the attack are currently being treated.