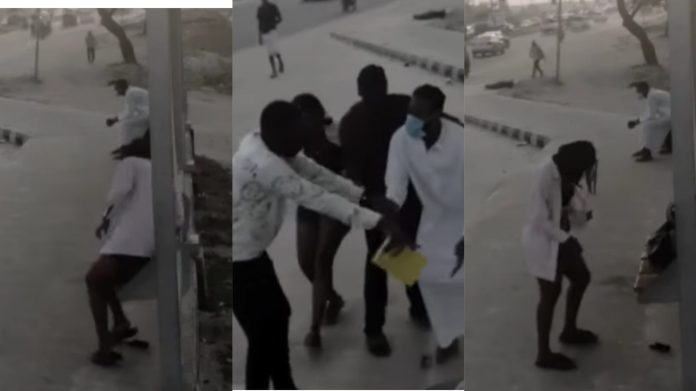 A young man suspected to be a yahoo boy has found himself in hot waters after CCTV camera captured the moment trying to harm an innocent woman.

In a viral video sighted on social media, the man walked to a bus stop and put something under a seat.

A few minutes later an unsuspecting lady came to sit on chair at the bus stop waiting for a car.

The lady started having a discomfort as she was seen scratching her body.

She then decided to walk to the back of the bus stop and ease herself.

While all this was going on, the man who put the substance was watching from a distance.

Luckily for her, a man of God who was passing by and sensed her discomfort prayed for her and took her away from the scene.

As soon as she left, the ritualist walked over to fetch the sand at where she had peed. He was immediately apprehended.

The whole thing looked staged as if it was a scene from a movie. But what made us think it might be real is that it was caught on a CCTV.