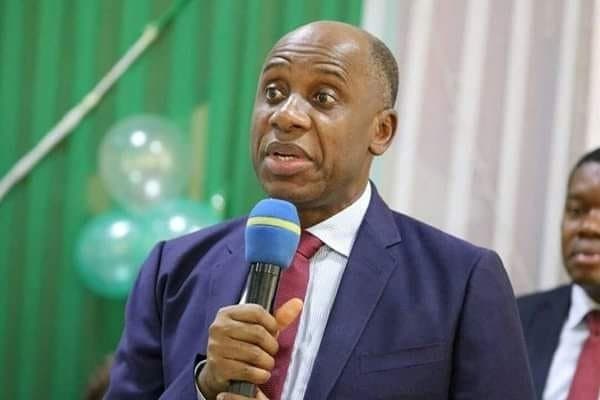 Former Minister of Transportation and presidential aspirant under the platform of All Progressives Congress (APC), Rotimi Amaechi has said that  Kogi State Governor, Alhaji Yahaya Bello should withdraw his presidential ambition for him because he has more experience than the governor.

The former Governor of Rivers State stated this when he came to Lokoja, the state capital to woo delegates ahead of the presidential primary of the party.

He was accompanied on the visit by the former Army Chief, Gen. Tukur Buratai.

Speaking at the Government House, Amaechi called on the delegates to prevail on governor Bello to step down his ambition for elderly people like him.

He said though Bello is qualified to contest for the presidency, he’s still young and should make way for him to become the party flag bearer.

“This is the 28th state I will be visiting. I can no longer be called one of the APC aspirants because I have become the leading aspirant,” he said.

Amaechi further said that he deserved the ticket ahead of other aspirants,

Read Also BREAKING: One Killed As Another Storey Building Collapses In Lagos

“I am a former Chairman of Speakers forum, two-term Chairman of Governorship forum, coupled with my interaction as Presidential DG campaign, I have what it takes to lead a country like ours.”

He noted that even though he was aware that Governor Bello is a contestant, he as an older, with more experience should be given the chance to lead so that he will provide him with the needed experience in governance.

“I am aware that His Excellency is also a contestant, but I am the only leading contestant, older with more experience and I want to inform him that I will provide him with the necessary experience he needs to govern when the time comes,” he added.

The Deputy Governor of the State, Edward Onoja who received the presidential aspirant on behalf of the Governor urged Amaechi to visit the governor and deliberate with him, saying only Governor Bello can tell the delegates the direction to follow.

He stated that the state remained an APC stronghold, assuring that they will deliver for the party in the next year general election the way they did in 2015 and 2019 general elections.