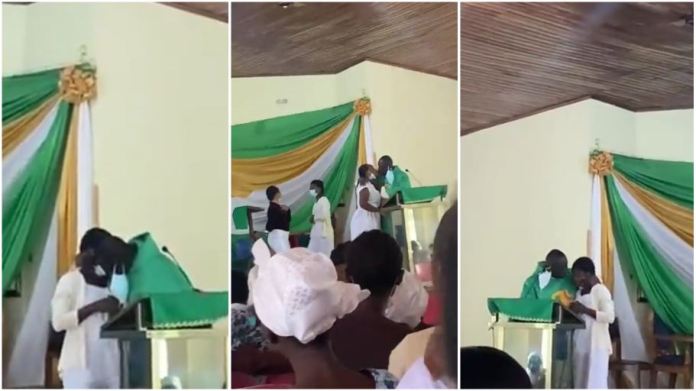 A video that captures an Anglican Church Reverend Father kissing some female students of St Monica’s College Of Education in the Asante-Mampong Diocese went viral on the internet.

In the video, the Reverend Father purposely removed his nose mask before kissing the female students who took turns to receive whatever blessing the preacher may have promised them.

The church members made up of both elderly and young people, are seen gleefully jumping and screaming to cheer up the man of God’s kissing spree.

Earlier, the church in a statement said it is saddened by the video circulating on social media in which one of their priests was seen kissing three female students of St. Monica’s College of Education during a church service.

“The Church is saddened by the news and wishes to state expressly that, a thorough investigation has immediately been instituted into the matter and the action of the said Priest would be dealt with in accordance with the norms and values of the Anglican Communion where morality is extremely revered in the Church,” it said.

It added that measures are being put in place to help the affected students get over the experience.

“…all efforts are being made to engage the students concerned through counseling sessions to avert any psychological issues that may arise as a result of the viral video,” it noted.

See video below as shared by atinkanews:

Ghana: Trouble As Teacher Impregnates 3 Students In The Same Class

Kissing Priest: Anglican Church releases statement after a Priest of the Church kissed 3 female students of St. Monica College on the mouth