The Neo Black Movement of Africa, NBM has disassociated itself over a viral video of some hoodlums who recently dehumanized and harassed a social media influencer who purportedly used the slangs of Black Axe confraternity in a viral Tik Tok video.

The movement in a press statement unequivocally disassociated itself from the hoodlums who assaulted the innocent lady as members of NBM. The group commended the police and security agencies for prompting swinging into action by apprehending some of the accused outlaws. 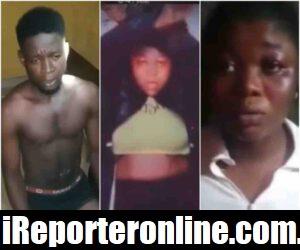 Part of the statement reads,

The Neo Black Movement of Africa (NBM) hereby dissociates itself from a viral video showing some hoodlums and hardened criminals that attacked and dehumanized a young lady over purportedly using the slangs of NBM in a viral TIK TOK video.

While we frown at such a murderous and wicked act it is pertinent to note that the Neo-Black Movement (NBM) is not in any way involved or in support of such criminal responses.

The NBM of Africa is not the same as Black Axe and has nothing in connection in whatsoever way.

While we commend the Nigeria Police Force and other security agencies for the prompt arrest of some of the criminals who brutalized the innocent lady, we are however constrained to make this public announcement in view of our noticing a possible linking of members of the NBM to the perpetrators of this heinous and sacrilegious act. As a matter of fact, the NBM of Africa was instrumental in the apprehension of some of the perpetrators.

We hereby restate, as always, that we are a law-abiding organisation registered with the Corporate Affairs Commission (CAC) as equally affirmed by courts in the land. Deliberate attempts by any agency or any news medium to associate members of the NBM of Africa with such criminal acts carried out by those hoodlums will be resisted and viewed as libellous.

As a Pan-Africanist socio-cultural organisation that seeks to promote fairness, justice and social equality we would not condone such wicked acts by any group of persons.

We have no relationship with the Black Axe confraternity or the gangsters and we never approved any member to confront anybody on account of any video released on social media and none of our members is among the arrested persons that orchestrated the dehumanizing video.