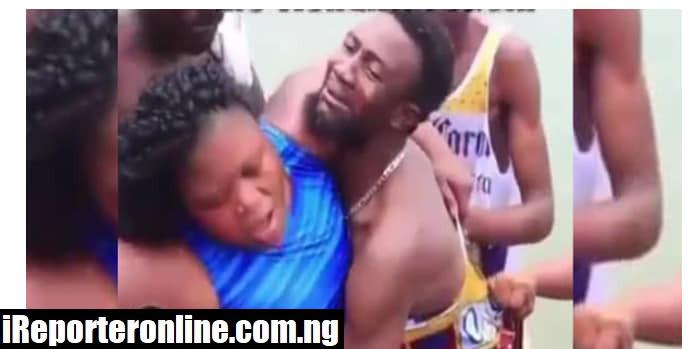 An unidentified Ghanian couple has been spotted in a video which is now making the round on social media, begging for forgiveness after being stuck in each other while having sex.

It was gathered that the couple were stuck in each other while having sex at a sacred river bank, lake Bosomtwi in Ghana.

According to a source, the couple who were in pain after the horrible incident called out their friends who came to their rescue.

The man could be seen in the video below, screaming the most while begging for forgiveness adding that the excruciating pain was unbearable.

According to Wikipedia “Lake Bosumtwi is the only natural lake in Ghana. It is situated within an ancient impact crater that is about 10.5 kilometres (6.5 mi) in diameter. It is about 30 km (19 mi) south-east of Kumasi the capital of Ashanti and is a popular recreational area. There are about 30 villages near crater Lake Bosumtwi, with a combined population of about 70,000. The most popular amongst the villages where tourists usually settle is Abono.”

It was learnt that, only the traditional authorities can appease to the river Gods for forgiveness. They poured libation obviously to beg the gods for the couple to be separated peacefully.

They were later sent to the hospital where they went through series of treatments.