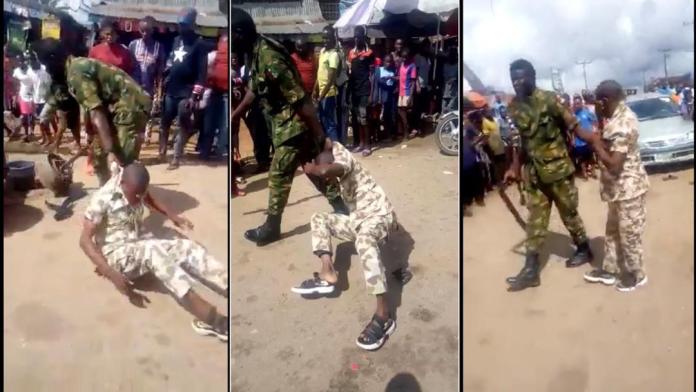 A new video taking over the internet shows a poor civilian who has been subjected to physical abuse by a soldier man for wearing a replica of army camouflage.

In most countries in the world if not all, civilians are prohibited from wearing military uniform and in some areas for safety and security reasons, it is law thus if someone is found culpable of this offence, the punishment is severe

However, the soldiers and security personals have maintained that civilians have been banned from wearing army camouflage for their own safety and security reasons.

In a trending video sighted online, a military officer took the law into his own hands and did justice to a civilian who wore the army camouflage in some part of Nigeria.

The civilian was severely beaten by the angry military officer as he was hitting him anything he could find on the ground and ruthlessly, he manhandled and dragged him on the ground in the full glare of the public.

Watch the video below as shared by atinkanews;

Hilarious!! Lady Catches Boyfriend Sleeping With Another Woman In Her Room, Records The Scene Live On Facebook (Video)