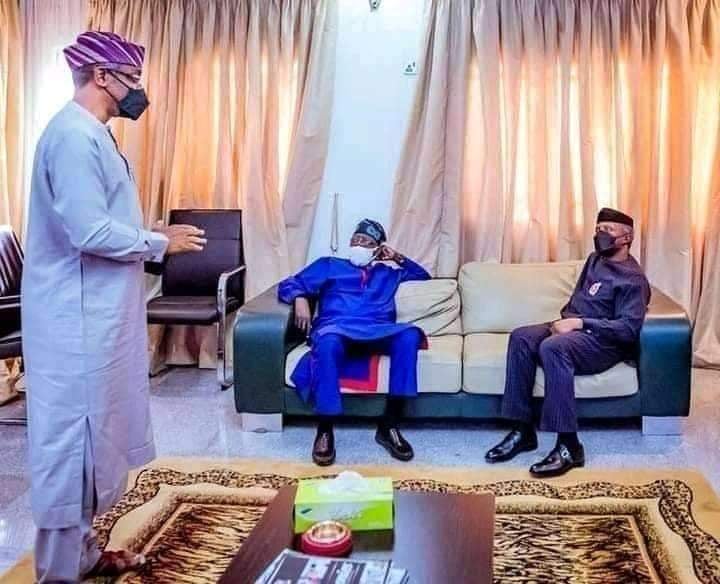 Give To Caesar What Belongs To Caesar: Why This Pics Of Tinubu, Osinbajo and Gbajabiamila Should Give “SENSE”

Hello my people my name remains, Osigwe Omo-Ikirodah of the Bush Radio Academy fame, so sorry for my daily absence for some weeks it was due to the burning head, so many things to write and ponder about. 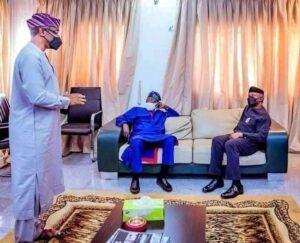 The past few days, going around some recreational spots, gardens and bars  I have noticed a few arguments with so much venom as regards the coming 2023 presidential elections.

Over a year ago when I started the mantra of Tinubu’s candidacy and the reason why everybody should brace up or sit tight and offer a credible challenge. they scorned me calling me names, now reality stares at their faces and they are now going mad with anger.

Hypocrisy might just be our major bane, I have said that whoever would be our next president must come from the following bracket, a former President, an Ex-Governor, a former Vice-President, a former or serving Senator, Minister etc. It is the norm universally, we should face reality, the presidency is not all about age or ideas it also involves temperament, tolerance, confidence, maturity, diplomacy and above all political NETWORTH.

Hate it or you like it,  the only way you can have your say is if you join the electoral process, so back to my observations at a garden in Abuja, a young man was boiling with anger why all these old and recycled leaders keep coming back for elective offices?

After ranting and shouting I calmed him down and asked who is your alternative? And he replied dem dey plenty na, i said please be explicit this was what you guys were saying two years ago, Dem dey na, dem dey na, and now it is getting close for even the primaries and you are still saying these same words, Dem dey na, for 2 years??  Please name your alternative?

Then putting his heads down in shame he said Osinbajo no dey, immediately he could recollect Osinbajo’s name he started shouting again if Osinbanjo was not capable meanwhile the drama he was putting up was almost similar to that of a preview of one of all those WWF wrestling matches featuring Ultimate Warrior and maybe Hulk Hogan.

So before I go further let me explain this recent picture of Asiwaju Bola Tinubu, Prof Yemi Osinbajo and Femi Gbajabiamila that was captured at a closed-door meeting,

And APC of course is the government of the day which translates finally to Tinubu as the national leader of the highest Yoruba leaders in the country.

So what is the issue of followers fighting over these leaders? This is a strategic move by the Yorubas to claim back the presidency which of course they merit. This article is not to massage egos but to put the reality on the ground, as we speak nothing short of the best hands should be presented by the Yoruba nation, I am an advocate of regions presenting their best hands as it is obviously and rightfully the time of the South to get back the presidency.

If Vice-President Osinbajo is your choice it’s very much okay but please stop spilling venom on Tinubu because the reality is that the Yoruba Nation should put their best hands forward. Tinubu has shown what it takes to rule the nation with justice and fairness, he has shown he has the clout to adequately address the pressing needs afflicting the country.

We need a leader that can confidently steer the affairs of our governors towards meeting the aspirations of their constituents. So if your choice happens to be Osinbajo, be claiming down these men are meeting daily to put forward the best hands.

Give to Caesar what belongs to Caesar, Tinubu has paid his dues whatever your opinion lies it’s better you dissipate much energy on your candidate who has signified interest in the presidential election and not on speculation.

This recent picture that represents these three top Yoruba leaders in Governance should pass some sense to everyone, the battle is not about self-interest but a collective one.

Of what essence are you concocting malicious and dangerous propaganda on social media and other platforms when these same people are on the same page? A while ago the vice-president appealed to his supporters to stop insulting Asiwaju Bola Ahmed Tinubu.

The idea is to provide the best hands for the job and not political flexing of muscles. Relax LAS LAS EVERYBODY GO DEY ok.

Osigwe Omo-Ikirodah writes in from Abuja,