A funny video of a Slay Queen has surfaced on social media and it is being shared crazily by netizens who find it hilarious. 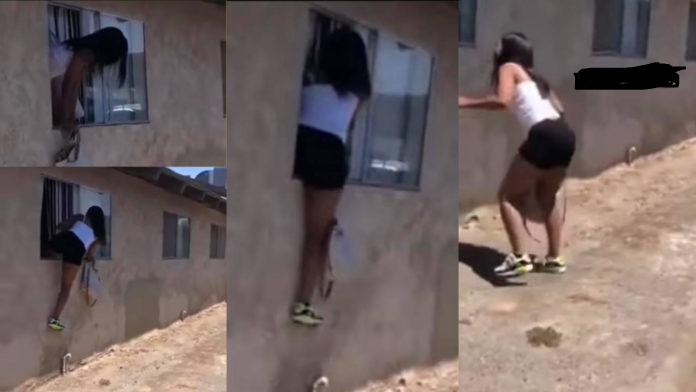 In the video, the Slay Queen who is obviously a side chick was escaping from a married man’s room through the window.

Read Also Wife Caught Her Husband With Side Chick At Hotel, Tears Her Clothes Into Pieces (Video)

The well dressed and pretty lady was banging the married man in the absence of his wife when she suddenly came home.

To avoid the shame that comes with being caught with a married man on his matrimonial bed, the young lady who is in her 20s fled through the window.

Irrespective of the fact that the window was a small size, the young lady was able to squeeze through and landed outside like the “Terminator”.

Unlucky for her, nosy neighbours were there and they captured everything on camera.

Credit: ghpage
Kindly Share This
Related Topics:
Up Next

#BBNaija: That Tega Is Not From Urhobo Clan Because It’s A Taboo For Our Wives To Act That Way – Delta State SA, Ovie Success