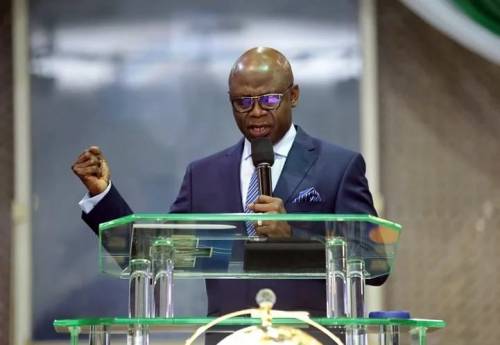 The senior pastor of Citadel Global Community Church, Tunde Bakare, has said it is time for war against President Muhammadu Buhari’s regime, saying he will no longer pay visits to the president who he once supported.

Bakare, in his speech, did not make a direct reference to Buhari in his latest tirade but before now, Bakare had revealed that he visited the president to advise him on national issues, but the president often failed to heed his advice.

He had once said, “The country’s security architecture even worsened (such) that we cannot sleep with two eyes closed. It’s so bad but God is not asleep. Some of my friends do criticise me that I was one of Buhari’s supporters and I had to tell them that I openly supported this man in 2011 but I am not saying I’m not seeing him again. He is someone that I visit sometimes and advises him on what to do and he will listen but once I leave, there is nothing to show for it.

”Later, I started staying back in my house but I have time to pray and plead for mercy…”

But speaking during a church service on Sunday, Bakare, who once claimed God told him that Buhari was coming to stabilise Nigeria, stated that he was now ready for war and no longer interested in meeting with the president.

He warned that if the President or anyone comes after him for harm, they are likely to learn a lesson.

He said, “I’m not interested in meeting you any longer; no more visits. Now, it is war because Nigeria must be set free.

“I dare you to come after me since that is the usual style now. You might have done it to others. You are about to learn a lesson if you touch me.

“If you know what I have done in secret, bring it to the open. I dare you to come after me if you can. I worked with you; I worked for you; I supported you to get there (where you are). When I talk now, I now have a smelly mouth.”

He further explained that injustice and lack of equity were responsible for calls for secession.

“We must realise that what has given rise to the agitation is lack of justice and equity. When there is justice, when there is equity, agitation will die down,” Bakare said.

“How can you be expending so much energy on (Sunday) Igboho and (Nnamdi) Kanu? Igboho and Kanu are not Nigeria’s problems. Nigeria must restructure, and no one can stop that.”

He said, “I am surprised at some of our clerics, particularly the Christian ones since it is the religion I am more familiar with. They speak as if they read another Bible. They preach hate from the pulpits, propagate falsehood, generate animosity against the government.”

This Is How Obi Cubana Became Wealthy – Aisha Yesufu