Commercial banks and other corporate offices operating in Enugu and Abia States on Friday removed Nigerian flags in their premises in compliance with an order by the leadership of the Indigenous People of Biafra (IPOB), that they didn’t want to see Nigerian flags anywhere in the southeast on October 1, 2021. 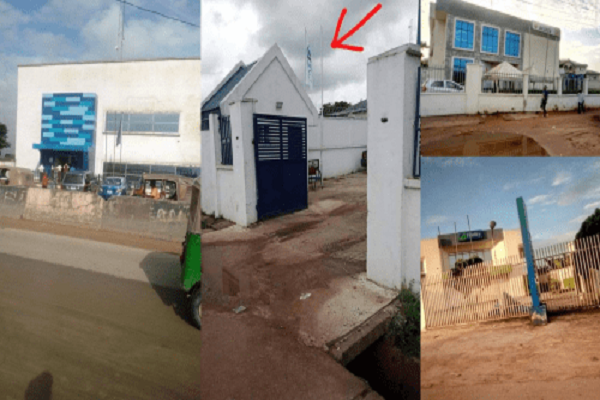 Most organisations in the states removed the Nigerian flags in their premises at the close of work on Thursday, The Nation Reports.

Checks within Abia State revealed that the Nigerian flags at Okpara Auditorium and some government offices along Library Avenue in Umuahia were still standing at the time of filing the report.

The Nation reports that there was a total compliance as markets including popular Ariaria International Market, Eziukwu, Cemetery, Shopping Center, among others were deserted by traders.

Filling stations in the state did not open for business as many that had needs for fuel resorted to black market sellers, causing some motorists to hike fares.

The story was not different in Enugu State as markets, fuel stations, departmental shops and eateries did not open for business.

No life was lost in the incident which occurred at about 4pm as the monarch and his family members were in Owerri, the state capital when his palace was engulfed by the inferno.

An eyewitness, who spoke to newsmen in confidence, said the arson caused some damages to the monarch’s property and two other buildings around his community, a neighboring community to Omuma, Governor Hope Uzodimma’s hometown.

He also said the fire was later put out by the combined efforts of good-spirited individuals in the community.

The monarch, who spoke to newsmen on the phone, confirmed the incident but blamed those he called enemies of progress in his community for the burning of his palace.

The monarch further said he was monitoring the development from his abode in Owerri,

He expressed sadness, saying “the level of damage can’t   be ascertained now but when he gets home tomorrow.”

Residents in the state stayed at home on Friday to observe the sit-at-home order issued by the Indigenous People of Biafra (IPOB) in their demand for a Biafra nation.

The situation virtually paralysed both economic and social activities in the entire state. All the markets, shops, and motor parks remained closed. Even artisans did not go out as usual for their daily business activities.

There were no vehicular movements in different parts of the state including Mbaise, Okigwe, Wethedral, Duglas, Port Harcourt, Onitsha and Aba Road. Streets in Owerri were practically empty as motorists and commercial vehicles were nowhere to be found to convey few stranded passengers on the roads to their destinations.

The situation at the premises of hotels, filling stations, eateries, motor parks, commercial institutions, business centres in Owerri was the same as their gates were also locked up.

Our correspondent who monitored the situation also gathered that a bus driver yet to be identified was burnt alive inside the bus at Mbaise area of the state by gunmen.

Also set ablaze by the gunmen at the same Mbaise was a truck heading to Owerri.

It was learnt that the bus loaded with passengers was coming from Owerri before it was attacked and set ablaze at Oboma Nguru Mbaise, while the truck heading to Owerri was equally burnt at Ahiara junction.

Contacted, the Police spokesman, CSP Michael Abattam confirmed the burning of the traditional ruler’s palace, saying “it is true.”