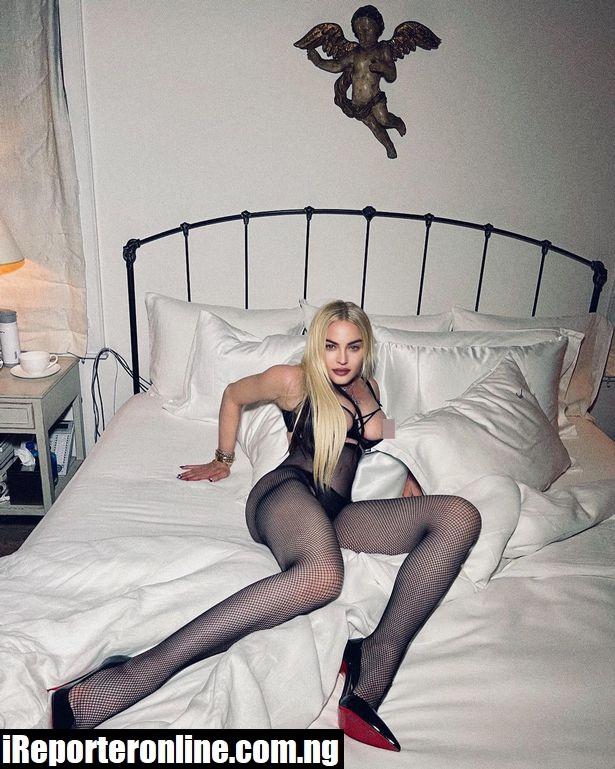 Madonna has maintained her sex symbol status for many years and looking at her most recent photo, it’s not hard to see why.

The 63-year old has proven that age is just a number as she stripped down to the teeniest of lingerie co-ords as the mother-of-six stripped right down.

The blonde beauty shared a series of snaps where she was seen writhing on her bed in a pair of fishnet tights, red bottoms and a black lingerie set.

As Madonna donned a mesh two-piece, photos of her saw her nipple peeking out of her bra as she failed to attempt to cover it before posting it straight to her profile.

In an additional pic, Madonna pushed her booty in the air as she held onto the bed frame and looked seductively into the camera lens while she donned a bold makeup look.

Elsewhere, Madonna was flaunting her booty as she ensured her backside had the full focus of the camera as she opted for a black thong and the fishnet tights with her red bottom heels.

Madonna’s hair fell beside her back as she shared the mesmerising snap to her profile.

The stunning 63-year-old also shared a photo of herself completely naked in the bed as she had her breasts out for the camera – though a subtle red heart emoji sat on her nipple to cover up her intimates.

As she posted the snap to her 16.9million followers the beauty hit upwards of 900,000 likes on Instagram.

Taking to Instagram, people flooded her with comments as one user simply wrote: “Nipplegate.”

However, many of her followers were instead less than impressed with the blonde startlet and her snaps, with one user writing: “Instead of doing these ridiculous pictures, do some of the quality music as you used to do.”

Another simply said: “Why?”

While Madonna was hit with a lot of backlash, the beauty often faces controversy when she shares her constant outrageous outfits – but she still loves her dazzling looks.

Madonna has never been one to hold back and she certainly dons an attitude of ‘flaunt it’, with the beauty sharing endless stunning snaps and stripping right down for awards shows.