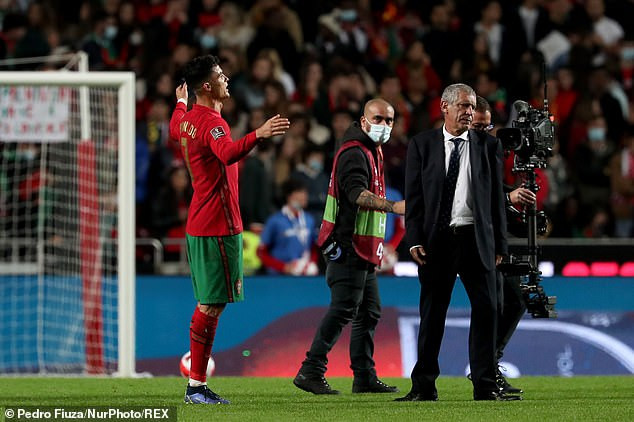 Portugal captain, Cristiano Ronaldo, was caught on camera shouting at the national team coach, Fernando Santos, after they failed to qualify for the 2022 World Cup on Sunday night.

Aleksandar Mitrovic scored a late winner for Serbia, as they got the automatic ticket from the group instead.

Renato Sanches had opened the scoring as early as the third minute, but Rui Patricio’s blunder allowed the visitors back into the game before Mitrovic stunned Portugal.

After the game, Ronaldo became furious, with his country now facing a play-off in March 2022 to secure a spot in Qatar.

The 36-year-old was in tears following the defeat and directed his anger at Santos.

As the players and staff from both sides shook hands following the final whistle, Ronaldo began shouting and showing dissent towards Santos.

Despite Ronaldo’s outburst, the Portugal boss continued to shake the player’s hand before walking off as the forward’s protests continued.