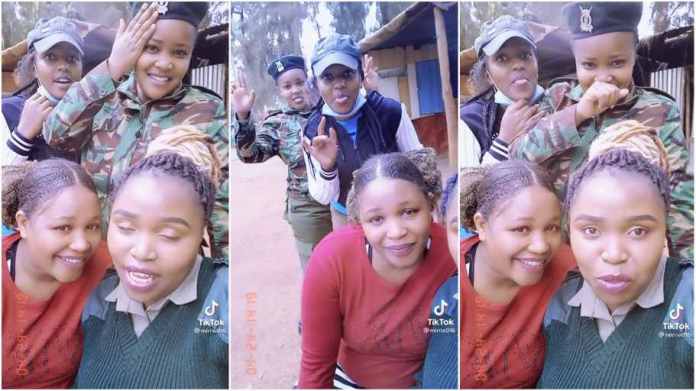 Extremely beautiful single female soldiers have emerged requesting single men to hook them up atleast to save them from desperation.

In a mouthwatering video clip doing rounds on major social media platforms across the globe, the well endowed young Kenyan cops can be heard complaining that they have remained single for a long time and its time they had to come out and face the reality.

“Hi guys? there is this story of International Couples Day August 18 and this one has no one… your many by the way so give us vybes… yes”

One of them made the request in swahili on behalf of the group through her Tik Tok account as they trouped and zoomed in to show their faces.

In the viral clip, there are four beautiful and light skinned cops dressed in work uniform asking for companions.

Watch the exciting video below as shared by atinkanews ;

Lady Breaks Glasses As She Catwalks In A Restaurant (Video)