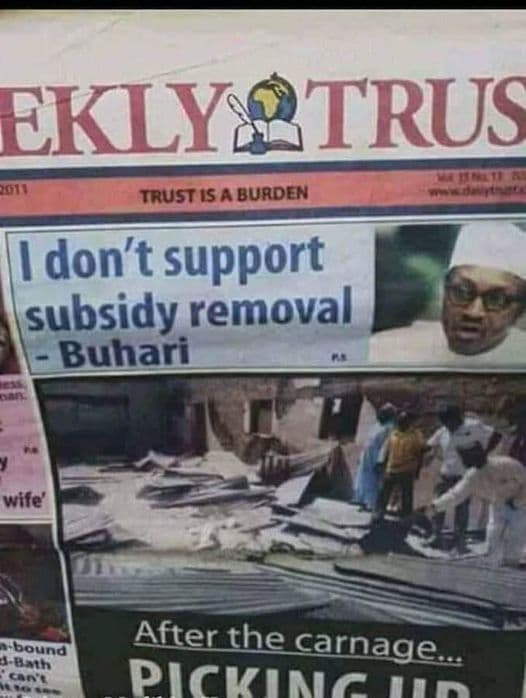 The Federal Government has fixed a June deadline for the final removal of petrol subsidy.

During a World Bank programme last week, Zainab Ahmed, Minister of Finance and Budget planning, laid out the plans for subsidy removal.

But 10 years ago, Buhari had criticised ex-President Goodluck Jonathan over the attempt to remove subsidy, describing the move as unpopular.

In a statement, the late Yinka Odumakin, who was his spokesman, issued on his behalf, Buhari had said the sharp practices that characterise the importation of petroleum products suggest that the deplorable state of Nigeria’s refineries is a deliberate sabotage.

During his speech at the 17th Nigerian Economic Summit (NSE) in Abuja, President Goodluck Jonathan had said Buhari was favourably disposed to the planned removal of subsidy.

“I can now appreciate people like Buhari, who in terms of politics was my major competitor, he is the only one person who has come up clearly that the issue of subsidizing petroleum products is a fraud. He is not playing politics with the development and future of Nigeria,” the President was reported to have said.

But  Buhari denied taking such a stand, insisting that most of the elements that go into “what is called subsidy” is the cost of corruption in the opaque business of oil importation.

He said as a man who has stood against corruption in both private and public spheres, he could not lend his support to a “measure that aids corruption and further impoverishes the people as all the Federal Government wants to do is to jerk up pump prices”.