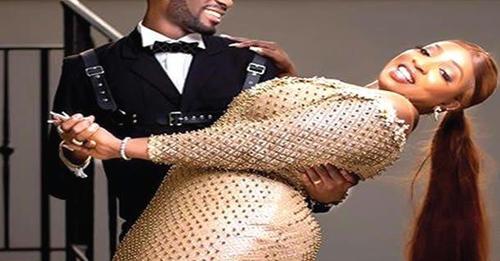 Master of ceremonies and ‘hype man’, Fisayo Michael, popularly known as MC Fish, has said he has no regrets showering his wife with love. According to him, he would continue kissing her feet and carrying her bags because he cherishes her.

Speaking on the qualities that endear him to his wife, he told Saturday Beats, “I can’t just mention one but a few things. My wife is a homemaker. She respects me in the home, and I can categorically say most celebs cannot even do what she does for me in the house. They can’t be as submissive as Anita Joseph is to me. To top it up, she’s a friend and a good companion. She understands her responsibilities as a wife. The most beautiful quality is that she makes me laugh, even when I am angry.”

Meanwhile, he and his wife had stirred controversy during the week when Anita shared an intimate video of both of them on her instagram page. However, MC Fish is of the opinion that those who criticised the video really need love. He said, “A lot of the people that criticised that video deep down really need love, and the sad part is they have no one showing them love. People should be able to express themselves in whichever way they please, especially if they are married. The truth is that Nigerians like to escape from the reality facing them. Off all the problems in this country, is it the love I’m showing to my wife that people have issues with? Nigerians should learn to face the current issues which we have, including poor electricity supply, insecurity, hunger and poverty.”

The hype man also insisted that what he does with his wife on social media is ‘edutainment’. He added, “We do both education and entertainment on social media’. Nobody has the right to tell one how to express one’s love to one’s partner. So, if I kiss my wife’s feet, carry her bags, or do anything to profess my love to her, it’s because I appreciate and cherish her.”

Recounting the highlights of his career in 2021, he said, “My career in 2021 was nothing but blissful. I organised two premium events called the ‘Drip Drop’. I also released two songs. Beyond that, I successfully ‘hyped’ and anchored over 200 events in 2021. It was indeed a great year.”