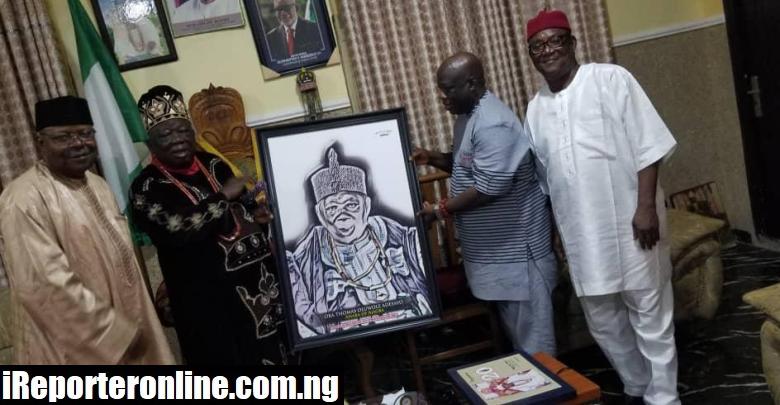 The Ahaba of Ajagba Kingdom, HRH Oba Thomas Oluwole Adesanyo has described the Ikale Heritage Development Association as the leading light in the development of Ikaleland.

The royal Father was full of praises for the socio-cultural group during a visit to his palace, in Ajagba town during the weekend saying that he has painstakingly monitored the activities of the IHDA in the last two years as he pledges his assurances of continued solidarity and support for the progressive efforts of the association.

“I am highly elated to receive the IHDA team” the Oba said. “I have followed the giant strides of the IHDA in the last two years and I’m happy that a team of Ikale like-minds have finally emerged to pursue the yearnings and aspirations of the Ikale people.

“It is no gainsaying that Ikaleland has passed through utter neglect by the government but the coming of IHDA has given us a voice to reach out to the government at all levels and we are sure that sooner than later we shall start to reap the rewards of the efforts of the IHDA.”

The Ahaba lamented that Ajagba Kingdom has become a haven of abandoned projects by the government revealing that the skills acquisition centre, rural electrification projects and the Aquatic Research Centre located in the town have all been abandoned.

“Not too long ago, a trailer brought hospital equipment worth millions but there was no hospital to utilize the equipment. I have all the items in the palace as we continue to beg the government to build the hospital.”

The Kabiyesi with his palace chiefs and community leaders took time to take the visiting IHDA team, led by the Chairman, Otunba Sola Olatunji round some of the sites of the abandoned projects after he had lavishly entertained the team.

The King also thrilled the audience with his eloquent thank you speech as Otunba Olatunji presented an artistic portrait to the Kabiyesi.