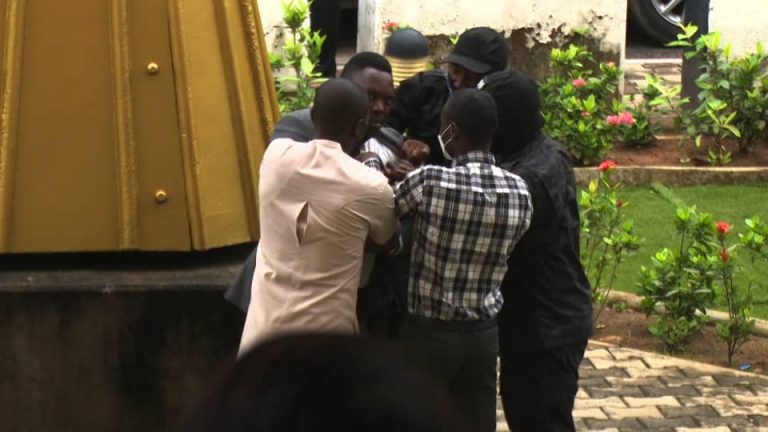 The operatives of the Department of State Services (DSS), on Monday, attacked Vanguard Photojournalist, Mr. Gbenga Olamikan, at the Federal High Court, Abuja.

Mr. Gbenga Olamikan was attacked for taking the photos of the detained associates of Sunday Igboho, who were brought to court in compliance with the judge’s order.

An officer on mufti aggressively approached the Vanguard photographer and was later joined by DSS officials.

The DSS operatives seized Olamikan’s phone and held it for over 40 minutes.

The phone was released after the intervention of Olamikan’s colleagues.

The operatives of the DSS also prevented newsmen from taking photographs and videos of the detainees.

Source: Pmnews
Kindly Share This
Dear Reader, Fetching good and credible news information is tedious and requires huge finance. We are soliciting support from our readers and fans. For as low as N1,000  you can be a part of our golden membership. Your support would go a long way in assisting us to continue guaranteeing quality news to our readers across the globe. Bank transfers can be made to: Zenith Bank 1014932118 Ireporteronline communications Inquiries: Email: [email protected] Whatsapp: +234 7032341798 FOR BUSSINESS ADVERT CLICK THE WHATSAPP IMAGE BELOW

Chop Ur Elephant And Leave Us With Our Fowl: Who Is Afraid Of Tinubu As Former Lagos State Governor Becomes More Popular Than NEPA Bill