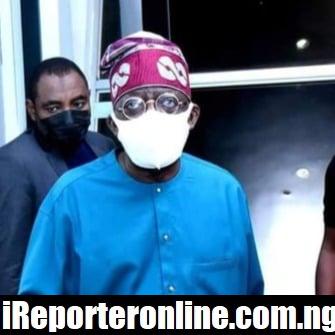 Chop Ur Elephant And Leave Us With Our Fowl: Who Is Afraid Of Tinubu As Former Lagos State Governor Becomes More Popular Than NEPA Bill

The palm-wine we drink, some people can drink it and remain wise; others lose all their senses.
(African Proverb)

I love African proverbs die , lessons too plenty to learn from each word used. Nothing wey go ever happen wey never happen before. Like my people always say there is nothing new under the sun.

It is quite common in Nigerian politics for political opponents to deploy the hate and slander game in other to gain an edge over their major competitors. Of course, it is allowed to a certain degree hence it falls under the term propaganda.

In Nigeria one of the most popular paper na NEPA bill , almost every household has one unless say na illegal light connection the household get.

Today one man seems to be dominating the political scene far way beyond his contemporaries that no day passes by without his mention. You see this palm wine wey we dey drink some of us when we shack am we go get sense well well while others them go lose the small senses wey dem get Kpatakpata. This is the bitter state of reality the opposition finds themselves in when it comes to the former Lagos State Governor, Asiwaju Bola Ahmed Tinubu as regards the 2023 presidential elections.

They are so scared of his rising profile that they have nothing else to say other than to peddle fake stories about his health, the game plan is to discredit the Jagaban on health grounds and pronounce him ineligible to contest for the 2023 presidency, they are so stiff scared of his acceptance across the 36 states of the Federation that all they wish him is death.

This year alone which still has about 5 months left they have wished him dead more than ten times. When he travels out for consultations they rush to the cyberspace to declare his incapacity, his death, or that he has gone under the surgery blade.

This is how a passionate fan of mine detailed Tinubu’s popularity which seems to have overtaken the NEPA bill, unlimited universality.

“Take it or leave it, Tinubu has become an issue in Nigerian politics. I remembered the second republic everything was Pa Awo. If rain didn’t fall it was Awolowo. If there is no food on the table, Awo caused it. If your wife has not conceived, it was Awolowo.
Remember that Tinubu has sacrificed to nation-building. During the third republic, the Jagaban was supposed to be the Senate President. He sacrificed it because of MKO for Ayorchia Ayu.
Tinubu was the main brain man behind NADECO. Tinubu was governor of Lagos State. He did well beyond his counterparts. He survived the treacherous antics of OBJ in 2003 and remained the only AD Governor.
During the build-up to the APC coalition, he was not found wanting.
You can find a job for a person, but cannot be the one to do the work. Blaming Tinubu has the main cause of Buhari’s shortfalls as Pa Adebanjo do claim is out of it. Everyone wanted change in 2015. Why?
As far as I am concerned, anyone against the Jagaban presidency of this country is simply out of envy. Let us set aside our selfish interest and consider the merit in choosing our next President of this great nation.
In terms of qualifications, building team spirit, building leadership, building bridges, good governance, no one can upset the Jagaban. This is a statement of fact.”

Come to think of it, if Tinubu was that ill like the way they want us to believe do you think he would be thinking of a presidency that is still months away? Do they even know the rigors in contesting in a presidential engagement? The small palm wine wey dem drink don twist their brains, person wey get health issues they think of battle? I don’t understand, the implications of their wolf cry would soon fall on their faces flat by the time 2023 comes around and the Jagaban is still very hale and hearty, then I wonder what they would tell the people how come since 2020 when they have been peddling the fake death and health rumors of the Jagaban.

It is pathetic that some Nigerians can no longer sit down and have a reset of their brains. When it comes to the field of propaganda we surely know the grandmasters and I would advise these naysayers to save their breathe and use it in defense of their Ghost presidential aspirants at the appropriate time as no single group has the monopoly of falsehood.

For me, if Nigerians what a better future then we must holistically look to the political elites and start tasking them on their plans to make Nigeria greater, sitting down idling away and waiting for a presidential candidate from the blues would not distort the reality that it is one amongst our political elites that would wear the crown. I repeat the presidency would not be handed over to a stranger, so who the cap fits let them wear it.

It is high time they start identifying with who their presidential aspirants are and leave us with the reality of a TInubu candidacy like I always tell my critics “Chop Your Elephant And Leave Me With My Fowl.”

Who is afraid of the Jagaban?