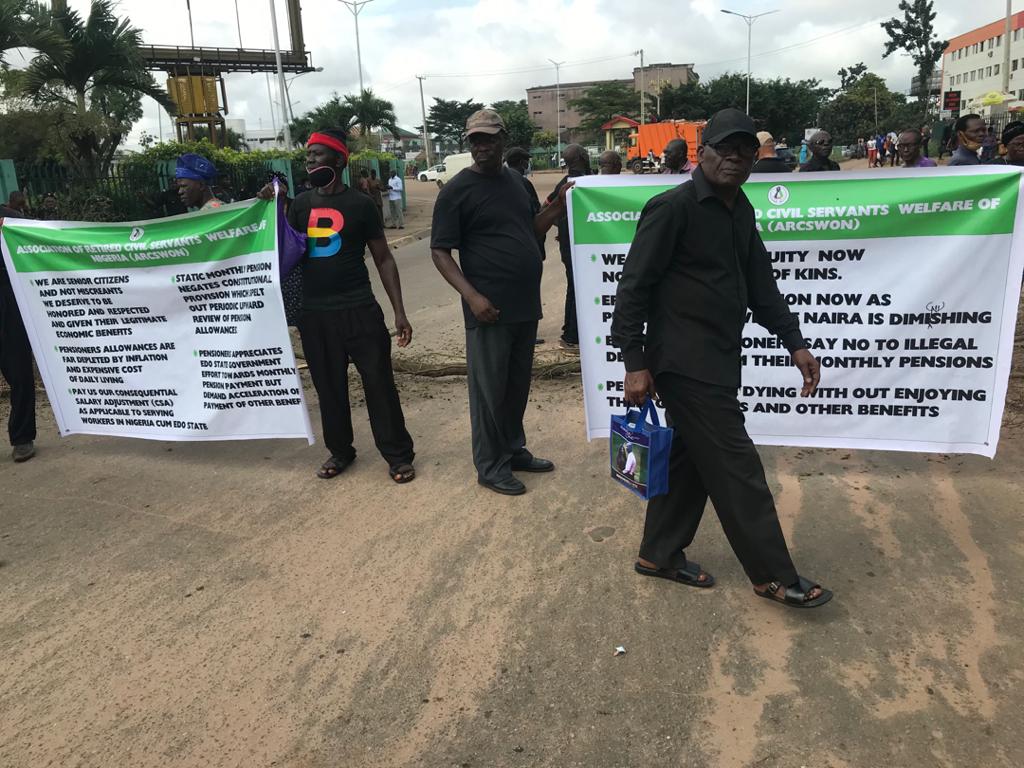 An unidentified pensioner slumped at the popular Ring Road in Benin, Edo State, during a protest by members of the state chapter of the Retired Civil Servants Welfare of Nigeria (ARCSWON), on Monday.

The retirees were protesting over unpaid pension gratuities, non-harmonisation of pensions, among other welfare issues.

The pensioner was rushed to the hospital by the union where he was resuscitated.

The pensioners clad in black attires carried placards with inscriptions such as “Pensioners Need Gratuity To take Care Of Our Health”, “Pay Our Gratuity and Harmonise Our Monthly Pension”, among others.

The protest caused heavy gridlock around ring road and adjoining streets as commuters had to trek to their respective destinations.

The spokesperson of the group, Yusuf Bako, said the protest was against illegal deduction of the monthly pension, among others.

“Also, the issue on ground is gratuity. Since 2012, state government retirees have not received their gratuities while that of local government is since 2008.”

“We also have issues with harmonization of our pensions; as at today, the teacher that taught me geography receives N4,000 a month,” he said.

He said the protest is a warning to the government about the mother of all protests that is coming if it fails to grant their request.

“On that day, we will carry pot, bed and stove to occupy this place even if it rains or it’s sunny, we will not leave until they grant our demands. But for today, we will leave because issues are resolved on a table”.

Addressing the pensioners, Osaro Washington, representative of the Edo State Pension Bureau, assured that all hands are on deck to address the issues raised by the aggrieved pensioners.

“We have asked them to put on hold the one percent deduction until further notice. We are not owing any pensioners. What they are saying is their gratuity.”

“We have told them times without number that the payment will be done as quickly as possible and we are holding meeting with all stakeholders in this particular issue,” he said.

Remember The Boy Who Stowed Away In Benin-Lagos Plane? He Is Currently Begging For Help