Benin City: The electoral circle has begun in earnest toward the 2023 general elections and the Peoples Democratic Party, PDP is currently in the middle of heavy politicking as regards its party’s ticket for various elective offices.

Edo South senatorial district which happens to be the political headquarters of Edo State politics is currently embroiled in a dispute over the PDP’s south senatorial ticket.

The incumbent, Senator Matthew Uroghide is insisting on a third term at the Red Chambers against party norms and standards according to party stakeholders.

PDP members are coming out to insist that the party must stamp fairness by urging Senator Matthew Uroghide against seeking a third term stating that even the populace are brewing dust on the third term mantra and may jettison the PDP if it goes ahead in giving to pressure mounted by the Senator. 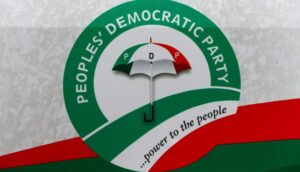 Speaking under the condition of facelessness when our correspondent reached out to some delegates they frowned at the rationale behind Uroghide seeking a third term against normal party norms.

” In the first place we should not even be having a discussion on three terms from any Senator from Edo South, it sounds like an aberration and if I must speak the truth to our party leaders then the aspiration of Senator Uroghde should be said to be “Dead On Arrival”.

Permit me to ask you, what do you need to tell the electorates which have started out a big campaign against third term lawmakers in the State?

This is not only happening in the PDP even in the APC there are fights against the third term for Federal Lawmakers that are currently serving their second term.

There is a popular activist out there, Kola Edokpayi the head of the Talakawa movement in Edo State, he commands a large following of human rights activists, he has taken it upon himself to lead the campaign against the third term for lawmakers. His likes are daily calling on Uroghide to forget the idea of a third term.

How do we face the electorates when we have not done party primaries and they have started mobilizing against third term legislators? That is a clear pointer that we do not have a marketable product if we insist on a third term.

“Our Edo South Senator has done his best he should please leave the stage for other qualified hands who would take Edo South to the next level. We appreciate his efforts but it is time to move on.” PDP delegate from Egor.

Meanwhile, less than 24 hrs after the declaration of Hon Ogbeide-Ihama seeking the Edo South ticket of the PDP, party delegates have started throwing support for the Oredo Reps member.

According to them, he is eminently qualified both as a party member and a distinguished lawmaker who has impacted his constituents.

“Democracy is based on the principle that each person’s vote should count equally. In an election, no one person should have more influence than another to decide the outcome.

We are totally in support of Rt Hon Ogbeide-Ihama and we delegates from Oredo would give hm our bloc vote” Oredo PDP delegate.

Edo South seems to be the hotbed for the battle ahead, so far no fewer than four heavyweight aspirants have signified interest in the Edo South ticket for the PDP, the aspirants include:

The next couple of days would have a clearer picture of how all these plays out, please do endeavour to follow our handles as we bring you undiluted stories as we all march towards the coming general elections.

‘How Terrorists Shattered Head Of Nursing Mother In Train Attack’