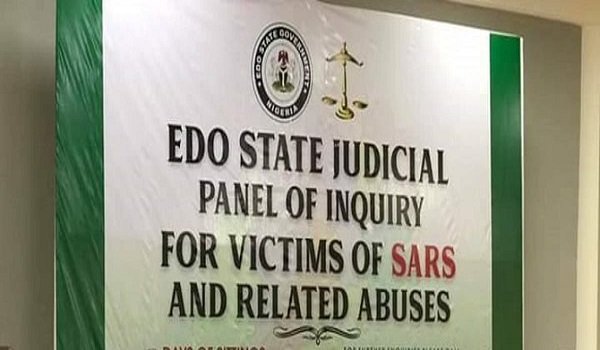 The report of the 28-member Judicial Panel of Inquiry constituted to investigate police brutality, human rights abuses, and extrajudicial killings by the disbanded police unit, the Special Anti-Robbery Squad (SARS), in Edo State, has been submitted to Governor Godwin Obaseki.

While receiving the report yesterday from the Chairman of the panel, Justice Ada Ehigiamusoe (rtd.) at the Government House, Benin,  Governor Obaseki hailed the members for their commitment, courage, and diligence, while assuring that his administration would carefully review the report and ensure that the recommendations were implemented.

A member of the panel, in an exclusive interview in Benin-City on Sunday, disclosed that N288 million was recommended as compensation for victims of police’s excesses in Edo, consisting of N98 million as enforcement of courts’ judgments and N190 million as general compensation for the other petitioners/complainants.

The panel’s member said: “Sittings of the panel ended about three months ago. The report was to be submitted on July 5. We waited in Government House, Benin-City for more than five hours, but Governor Godwin Obaseki was not available for the properly scheduled submission of the report.

“The Secretary to Edo State Government (SSG), Barr. Osarodion Ogie, later informed the panel’s members that Governor Obaseki was outside the state and he missed his flight. SSG also told us that the Edo Governor asked him to inform us that he would want to personally receive the report, thereby rescheduling the submission to July 12,” but eventually submitted yesterday.

Obaseki, while receiving the report, stated that it would be gone through with great diligence.

He said: “We will look at each and every recommendation made and where clarifications are needed, the panel will be contacted.

“This is a nationwide activity. In our last National Economic Council (NEC) meeting, it was decided that all states should submit their reports on the investigations carried out during the #EndSARS protests. We expect that we have both the national response and Edo’s specific response on the destruction experienced during last year’s #EndSARS protest.”

The Governor also advised that to forestall a recurrence of the #ENDSARS protests in the country, political leaders should listen to the yearnings of their people, knowing that the people gave them the political mandate through the ballot.

He said: “The #ENDSARS demonstrations of last year are a pointer to the fundamental injustices in our society. All of us, particularly our political leaders in this country, must begin to understand that if we do not listen to the yearnings of our people more, and continue to carry on as if we are in power for ourselves, the #ENDSARS protests that we experienced last year will be a joke. We pray that the situation does not reoccur.

The Chairman of the panel had earlier thanked Obaseki for the opportunity to serve the people of Edo state.

She disclosed that the panel received 170 petitions and struck out 25 for lack of diligence, while ten others were dismissed for lacking in merit, with 135 petitions considered to be meritorious.

Justice Ehigiamusoe (rtd.) said: “Ten petitions, of 135, sought the enforcement of judgments of various high courts against the police for acts of brutality and extrajudicial killings.

“We recommended the payment of compensations to the victims and/or their families for the aforementioned acts of the police.”

It will be recalled that during the #EndSARS protests in Edo on October 19 last year, hoodlums attacked the Maximum Correctional Centre, popularly referred to as White House, on Sapele Road, and Oko Medium Correctional Centre on Airport Road, both in Benin, releasing almost 2,000 inmates, mostly condemned criminals, who immediately returned to crime.

The hoodlums also razed seven police stations and vehicles in the premises, after looting the arms, ammunition, uniforms, and other valuable property worth millions of naira, making the affected policemen and the Divisional Police Officers (DPOs) to relocate for many months to Edo police headquarters at the Government Reservation Area (GRA), Benin, while the promise by Obaseki to rebuild the burnt police stations is yet to be fulfilled.