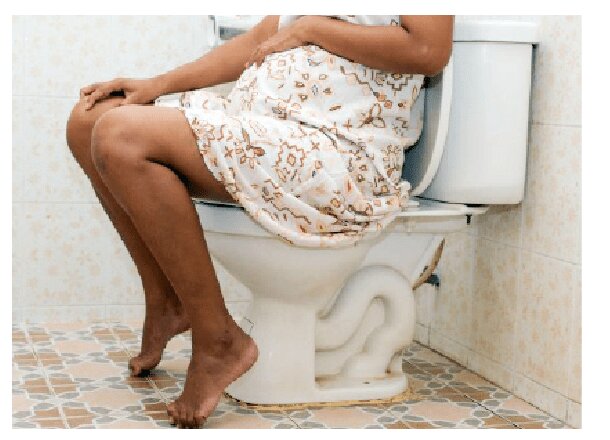 Hemorrhoids: The Danger In Sitting Too Long In The Toilet

With increased pressure that can be caused by pregnancy, obesity, heavy lifting and chronic straining to have a bowel movement, hemorrhoids may become problematic.

Although many people have hemorrhoids, not all experience symptoms. Internal hemorrhoids may cause bright red blood in the toilet bowl, a feeling of fullness or discomfort, or mucus discharge. They also can protrude, or pop out, with a bowel movement; usually, they return to the inside by themselves.

External hemorrhoids are felt as a lump near the anus that can cause pain. The lump is caused by a blood clot, causing a purple-blue color.

Because bleeding can be a symptom of cancer in the colon or rectum, a colonoscopy may need to be done before  your hemorrhoids can be treated. This is a diagnostic procedure that uses a lighted, flexible tube inserted through the rectum. If you have a family history of cancer, are over age 50 or have other symptoms or risk factors, this test can catch colorectal cancer when it is small. This procedure is done as an outpatient basis. Small numbers of people who have had this operation may leak gas or stool.

According to Nigerian-UK based Dr Olufunmilayo Ogunsanya ,  the public should desist from sitting on the toilet for too long because of the risk of developing hemorrhoids, a disease colloquially known as piles.

“Do you know  that sitting on the toilet seat for 15 minutes or more can give you hemorrhoids (piles or “jedijedi”)? Worse,  if you are the type who sits in toilet to press phone. Toilet is not a makeup studio. And it is not your family house. Stop making conference calls. Pass stool and go,” he said in a Tweet post.

“What we call “hemorrhoids” in medical circle is just a fancy term for some veins in and around your anus. When you get constipated, strain to get out your poo or sit for too long on a toilet seat, these veins get engorged with blood. Over time, these engorged veins can bleed.

So basically, while it may be tempting to sit in the toilet seat and just check emails, laugh at Instagram jokes and retweet Twitter trending gists, please be aware that this is not a healthy practice for you at all, especially if you are someone who is prone to haemorrhoids.

“So how long should you sit on a toilet seat? Only as long as you have the urge to poo and once the poo is out – leave the toilet. Usually this is two minutes. If poo doesn’t come in two minutes, stand up and find something else to do. Except you are hiding from people you owe money,” Dr Ogunsanya said.

However, according to Dr. Satish Rao, director of Neurogastroenterology and Motility at the Medical College of Georgia at Augusta University, when asked whether there is any medical issue with the way the buttocks interact with the toilet seat that could somehow cause trauma to the anus. “None whatsoever,” he says.

“If you’re just going to sit there, and it’s a good time for you to catch up on gossip and news, I don’t think that, per se, is harmful.  He explains, as long as a person has enough padding on their butt and can tolerate the rigid seat. “Just sitting is not harmful. It’s the effort and straining for long periods of time—that is where the harm comes.”

If there is any danger between man and toilet, Rao stresses, it’s in the strain. The problem with excessive straining during defecation is that, over time, it weakens the nerves and muscles of the pelvic floor.

“In the pelvic floor area, the nerves actually intertwine with the muscle,” Rao says. “When you have that kind of arrangement and excessively move the muscle repeatedly, then the nerve is subjected to repeated nerve trauma.” That can lead to a prolapsed rectum and even leakage of stools, he says—not the sort of thing that finishing a New Yorker article before flushing can justify.

It is important, then, to understand what excessive straining actually means. Dr. Rao says that a normal bowel movement should start with an urge to defecate followed by an average of five minutes of defecation with little straining. Problems begin occurring once a person has been straining for 10 minutes or longer.

Straining has some pretty serious, hair-raising drawbacks. One of the worst-case scenarios from excessive straining is called internal rectal prolapse, Rao says. This is a condition in which the lining of the rectum actually comes out through the anus. And because the lower two inches of the rectal lining is incredibly sensitive, touching it can give you a constant feeling of urgency, resulting in more straining. “What are you trying to poop?” Rao asks. “You’re trying to poop your own lining.” And eventually it does come out.

Luckily, these are extreme scenarios that can be avoided, by recognizing when the strain has gone on too long. That’s 10 minutes. Set the timer. But for those not feeling the strain, and simply looking for some peace and quiet behind a locked door, Rao says there’s nothing wrong with indulging in some bathroom “me” time.

In the event one develops a hemorrhoid, there are several ways to treat it. The best way may be to relieve the symptoms and prevent the hemorrhoids from becoming problematic. This is best done by taking a warm tub or sitz bath several times a day in plain, warm water for about 10 minutes, using ice packs to reduce swelling and ensuring regular, soft bowel movements by eliminating foods that lead to constipation, adding fiber to your diet, drinking lots of fluids and exercising regularly.

If your hemorrhoids do not respond to the above therapies, or are already very problematic, there are a number of other treatments options, including Rubber Band Ligation, also called banding. This involves placing a very small rubber band around the base of the hemorrhoid inside the rectum. The band cuts off circulation and the hemorrhoid withers away within seven to 10 days. This leaves a scar that prevents further bleeding and prolapse. This is usually done in the office but sometimes it is done in surgery.

Alternatively, a chemical solution may be injected around the blood vessel to shrink the hemorrhoid. This causes inflammation and scarring. This is done in the office but has a higher chance of only working temporarily. You may return to daily activities right away.

When hemorrhoids are severe, extensive, prolapsing or incarcerated, they may require removal by surgery known as hemorrhoidectomy. This is done under anesthesia. Because there is a risk of causing permanent damage to the sphincter – the muscle that controls your bowel movements – this operation is only done if absolutely necessary.

When an external hemorrhoid develops, it can be treated with excision, or cutting open, of the hemorrhoid or clot if you are able to be seen within the first 24 hours of pain. After that, the hemorrhoid will begin to go away on its own and cutting it open will not help it heal more quickly. Warm baths are very helpful for this.

6 Things You Are Doing That Is Lowering Your Sperm Count