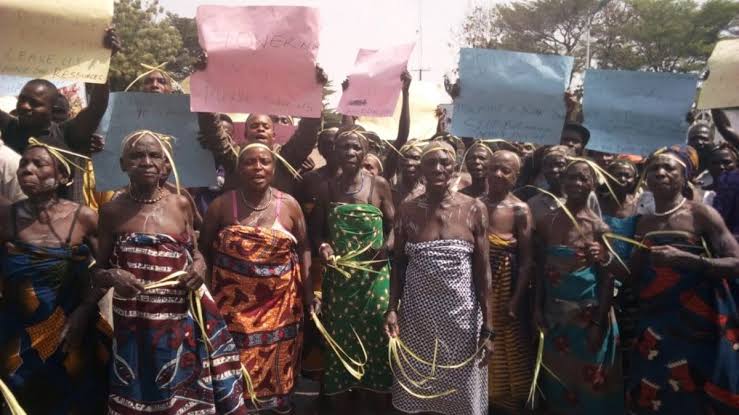 No fewer than 12 women from Agobiri community in the Southern Ijaw Local Government Area of Bayelsa State have been arraigned by the police for allegedly plotting to scuttle the ongoing construction of the Yenagoa-Oporoma Road by the state government with juju (charms).

The women were said to be carrying out a demonstration demanding that the road should pass through their community to give residents a sense of belonging.

The police, in a two-count charge filed before the magistrate’s court, Oporoma division, accused the protesting women of conspiracy to commit a felony.

The charge read in part, “That you (all the accused) and others at large, on the same date and place in the aforesaid magisterial district, with intent to carry out a common purpose, did assemble in such a manner by blocking the ongoing Oporoma-Yenagoa Road construction with sticks, plantain, juju, palm fronds, causing persons in the neighbourhood to fear and tumultuously disturb the peace of the people using access road without reasonable occasion, thereby committing an offence contrary to Section 54 and punishable under Section 55 of the Criminal Code Law, Cap. C14 Laws of Bayelsa State.”

But the protesters pleaded not guilty and were granted bail in the sum of N50,000 each with one surety who owned landed property.

The Agobiri women were arrested during their protest against alleged exclusion from the communities to benefit from the road project.

They had allegedly threatened to stop the road project if the Governor Douye Diri-led administration did not include their community in the road infrastructure.