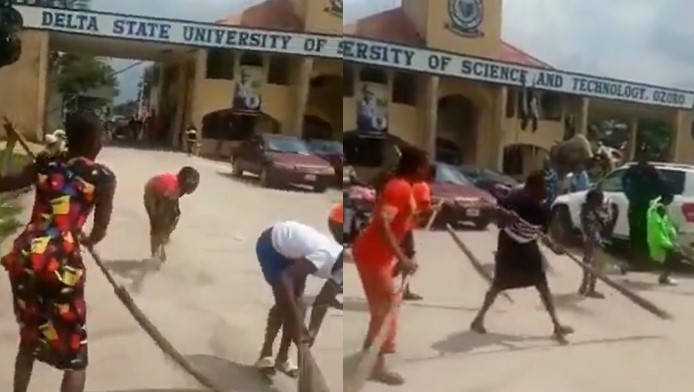 A video making rounds online show students of Delta State Polytechnic, Ozoro sweeping the main gate of the school as a way of rejoicing over the exit of the Rector.

The Rector’s exit was as a result of the recent upgrade of the school from a polytechnic to a University of Science and Technology.

The students who were mostly ladies couldn’t contain their excitement as they picked up their brooms to sweep the entrance of the gate.

READ ALSO: Drama As Mermaid Was Seen Taking A Swim In Floodwater [Photos]

Governor Ifeanyi Okowa announced this in separate Bills to the state house of assembly which were read on the floor by its speaker, Sheriff Oborevwori, during plenary in March 2021.

Shocking: HND holder reveals why he resigned from his banking work to hawking bread