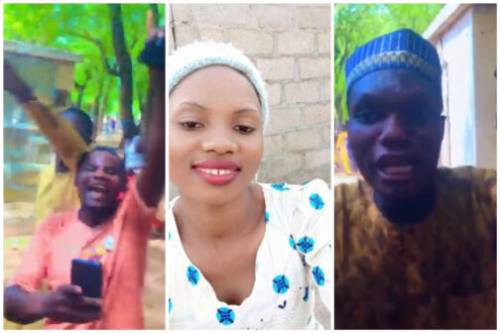 Human rights activist and co-convener of #BringBackOurGirls movement, Aisha Yesufu, has said the suspected killers of Deborah Samuel, a female student of Shehu Shagari College of Education, Sokoto State, ought not to be on the run.

Yesufu added that neither Prophet Muhammad nor the Holy Qu’an permitted anyone to kill his or her fellow, saying whoever killed under whatever claim was a murderer as enshrined in the 1999 Constitution of the Federal Republic of Nigeria.

She queried why Deborah’s suspected killers could kill for Prophet Muhammad but not ready to face prosecution and die for the prophet.

Quoting chapters and verse of the Holy Qu’ran, Yesufu in a statement published on her website, argued that the non-compulsory nature of religion was reinstated by Allah in Qur’an chapter 2 verse 256 ‘There is no compulsion in religion.’

The different messages in the Qur’an addressed to “O ye who believe” and others to “O Mankind” clearly shows that the injunctions in the Qur’an are not binding on everyone.

Yesufu’s statement reads, “Section 10 of the 1999 Constitution of the Federal Republic of Nigeria is clear on the fact that no state in Nigeria shall adopt any religion; hence, Nigeria is a secular state.

“With the multitude of faith and religion of citizens of Nigeria, how then does the state determine blasphemy? Nigeria is not only a secular state; it is a multi-religious state. There are different people with different beliefs and faith.

“There are some who do not subscribe to any faith. These are the realities of our lives and must be respected by all. Qur’an chapter 49 verse 13 states that “O mankind, indeed We have created you from male and female and made you peoples and tribes that you may know one another. Indeed, the most noble of you in the sight of Allah is the most righteous of you. Indeed, Allah is Knowing and Acquainted”.

“Why then do people exhibit their murderous tendencies all in the name of religion? It is depressing to know that our society breeds serial killers who get away with their heinous actions “without repercussions. As a teenager in secondary school I first heard reports of killings in the name of religion and as an adult in my late forties I am yet to hear of reports of prosecution of these killers.

Yesufu further asked how many people look after orphans and widows as enjoined in the Qu’ran. We haven’t done the things enjoined by the Prophet (SAW) yet we kill people.”

“Whenever anybody says anything denigrating about the prophet; the onus is on us because we have not lived the life examples the Prophet (SAW) has given to us and we should check ourselves. As for the main perpetrator of Deborah’s murder whom the police say is on the run I have one question; How come you were ready to kill for the prophet but not ready to face the consequences and die for the prophet?” she said.