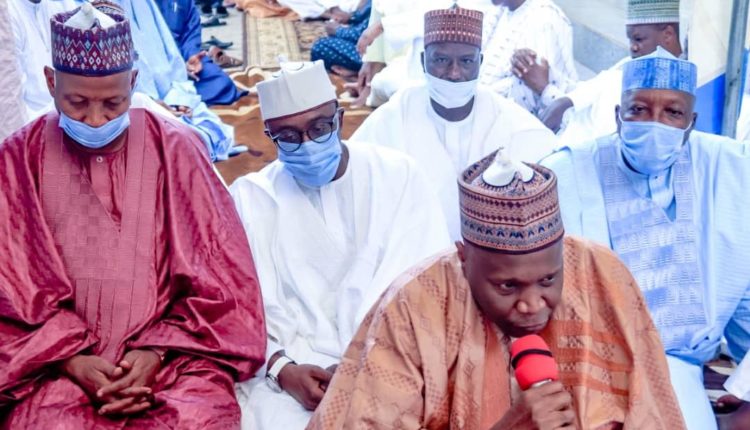 Tragedy struck in Gombe State as one of the sons of the state, Major Auwal Danbabu Mohammed, his wife, Fadila Auwalu Shehu Brema and only daughter, Aisha lost their lives in a ghastly motor accident.

The State Governor, Muhammadu Inuwa Yahaya who received the sad news with great shock described it as most unfortunate and a great loss to the state and its people.

The accident was said to have occurred along the ever busy Zamfara-Kano Road while the family was on the way back to base after the Sallah celebrations.

Until his death, Major Auwal Danbabu was the Staff Officer at 1 Brigade of the Nigerian Army, Gusau in Zamfara state.

Inuwa Yahaya had  on Friday led a delegation on a condolence visit to Alhaji Shehu Brema family at their  Kumbiya- Kumbiya residence where he consoled them over the  tragic loss of their loved ones.

He lamented that the loss of loved ones is always an unfathomable tragedy, which is usually compounded when such death occurs at prime age.

The Governor said that, “The loss of  young persons at their prime age, is usually a moment of heartbreak for anyone, especially for family members, friends and associates.”

“We join in your grief and on behalf of the Government and people of Gombe, we condole with you and pray that Almighty Allah will give us all fortitude and grant them Aljannat Firdaus,” the Governor told the bereaved family.

The Governor was accompanied on the condolence visit by the Chief of staff,  Alhaji Abubakar Inuwa Kari,  Head of Civil Service,  Alhaji Bappayo Yahaya, Commissioners, Advisers and other aides as contained in a statement by Ismaila Uba Misilli, Director-General (Press Affairs), Government House, Gombe.