The Olu of Warri, His Royal Majesty Ogiame Atuwatse III, commenced the revalidation and confirmation of the Warri Council of chiefs today September 2. 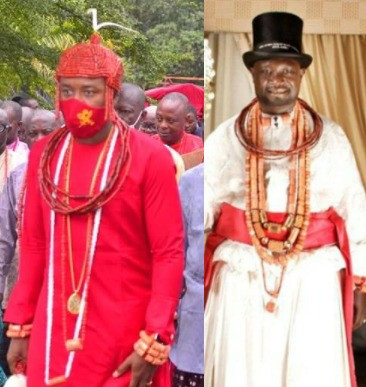 This comes after he issued a public notice dissolving the council and other committees in the Kingdom.

The reaffirmation of the chiefs took place at Ode-Itsekiri, the ancestral home of the Itsekiris in Warri South council area of Delta.

The Nation reports that the exercise saw the emergence of Johnson Amatserunleghe as the most senior Chief, (traditional prime minister) of the kingdom. His new position displaces Ayirimi Emami, who holds the position of ‘Ologbotsere’ and served as prime minister of Warri kingdom during the time of Ogiame Ikenwoli.

The monarch, during the colourful ceremony, placed beads around the neck of the chiefs and handed them swords, signifying their readmission into the Warri Council of Chiefs.

More of the chiefs in the kingdom would be reaffirmed in the coming days.