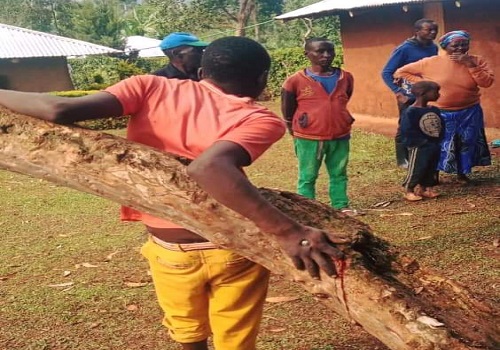 Outrage Over Kenyan Teenager Nailed To A Tree (Photo)

Kenyans are pouring outrage on social media following the nailing of a teenager to a tree by unknown persons over alleged radio theft.

Nineteen-year-old Collins Sambaya was found in the morning nailed to a tree in his Izava Village in Vihiga County, on Friday. February 18, 2022.

Sambaya was secured to the tree, arms wide apart, with two roofing nails driven through each palm of his hands.

Shocked villagers reported the incident to the police, who promptly rescued him.

Kenya’s Directorate of Criminal Investigations (DCI) confirmed the incident in a statement.

The incident brought Izava Village to a standstill, with shocked and distraught villagers watching in disbelief from a distance as officers rescued Sambaya and rushed him to a hospital.

According to the DCI, a manhunt has been launched for the suspects “with the area security team employing every available resource to apprehend the suspects.”

Vihiga County is an administrative region in the former Western Province of Kenya.
It has a population of 554,622 and an area of 563 km². Vihiga County was split from Kakamega County in 1990.

Shocked Kenyans poured their anger on social media called for the arrest of the perpetrators.

Writing on Facebook, Nicholas Odhiambo Odwar said: “What happened to our humanity? We’ve lost it all. Why, why should people be this cruel?

“A 19-yr old does not have a fully developed mind, he only needs the society to guide him. But what does society do? Turn against each other, we are filled with anger and hatred for one another.

“We are our own enemy. Such a sickening world.”

Eboko Rashid said: “This is too barbaric, diabolical, vexatious, irksome and obnoxious. I mean there is no amount of anger that can warrant such an evil act. The moral fiber of our society has greatly degenerated. This is pathetic, to say the least. The perpetrators MUST face the long arm of the law. What a shame!”

Kipkirui Raymond agreed. He said: “Indeed. So sad. Crucifiers must be brought to book for such inhuman crucifixion act.”

Kyle Knick also condemned the act. He said:”Surely.. How hard was it to take him to a police station and report him… Dear Lord have mercy on our societies.. So sad indeed.. It doesn’t matter what he did wrong, there is a way and a right and humane way of doing things…”

Ferdinand Makokha said: “19 years old, thus just a boy who is in exploration and passing a stage. Support them the right way without physically, emotionally or psychologically torturing or tormenting them but mentoring them to become responsible citizens of this great country.”

Kiriungi Njogu Ke said: “Ngai mwathani! This is sad, wrong, evil and the saddest thing that can happen to anyone. This is cruel and so hurting. No matter the crime, this one has gone overboard. Humans are dangerous. Animals have fewer brains but can not behave like this. Am so teary. May justice prevail.”

Shillah Cheru said: “Lord protect our children. This is pure wickedness. This is the most heartbreaking thing have seen this night. Where did humanity go?” 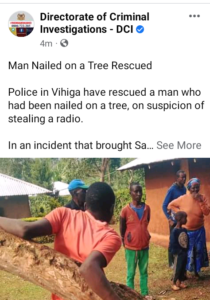 Any Member Of My Church Who Goes For Big Brother Will Die – Controversial Preacher, Mummy GO